Carra has no complaints 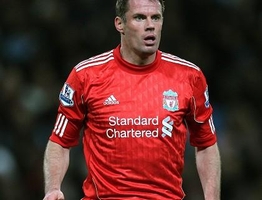 The veteran centre-back lost his position in the side because of injury and prior to Saturday's goalless draw at home to Stoke had not started in 11 league matches, playing only in cup games.

Over the last two months Martin Skrtel and Daniel Agger have established themselves as the first-choice partnership in central defence, and the former England international said: "The lads are playing well. Of course you want to play and the manager wouldn't expect anything else."

However, there have been no complaints from the Bootle-born local lad who has been at the club since he was at primary school, making his debut more than 15 years go.

"When I have been playing over the years and doing well someone else has had to sit on the bench for me," said Carragher, who has made 684 appearances for the Reds.

"The roles have reversed now and you have to show respect to the manager, the club and the players playing in my position. I appreciate that. The club have done a lot for me over the years.

"I am not going to say anything or cause any trouble just because I am not playing. You have got to be professional and wait for your chance. When it comes, you have got to do as well as you can."

Of his return to the first-choice starting line he added: "Of course I enjoyed it, I am no different to anyone else.

"I have been out the side for a while and understandably so; the lads in my position and the whole team have been doing great. It was just nice to put the red shirt on and play at Anfield again.

"It is something that I have wanted to do since I was 18 and nothing has changed now I'm nearly 34. But the lads have been doing great and I understand the situation."