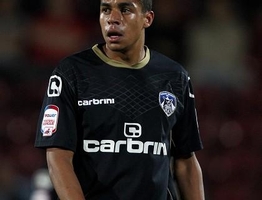 Just when the aftermath of striker Luis Suarez's eight-match ban for racially abusing Manchester United defender Patrice Evra was dying down, the Merseysiders have found themselves having to deal with another issue.

Late in the game the 20-year-old, on loan from Norwich, appeared to take offence to something shouted from the Kop. Despite reassurance from his team-mates, Dirk Kuyt and Liverpool captain Steven Gerrard, the right-back was visibly upset and seemed close to tears.

There then appeared to be discussion between the fourth official and a police officer down by the tunnel while the match was continuing. Liverpool confirmed an incident took place and said investigations were continuing.

A club statement read: "An incident occurred in the second half of the match which is now being investigated by both the club and the police. We will continue to work with the police to establish the details of what actually happened and will make a further statement in due course."

Merseyside Police said they had begun an investigation but confirmed, contrary to reports, there had been no arrests in relation to the incident.

"Merseyside Police can confirm that no-one has been arrested this evening, Friday 6 January, on suspicion of racially aggravated behaviour during tonight's FA Cup fixture at Anfield," said a police spokesman.

"However, the Force and Liverpool Football Club are investigating following an incident that occurred during the second half of the game. The aim of the investigation is to establish the full circumstances surrounding the incident to ascertain if action needs to be taken."

Oldham manager Paul Dickov said he had not spoken to the player about the incident, but accepted something had upset him.