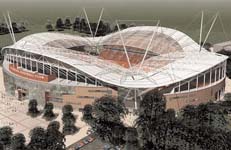 According to the Echo:

LFC are focusing on the designs  created by Manchester-based firm AFL - the company which designed the club's  training facility at Melwood - plans first  made when Liverpool FC were under the stewardship of ex chairman David Moores.

It is  understood that scrapping the  plans of the former American owners  Tom Hicks and George Gillett in favour  of the original option has been the focus  of Fenway Sports Group, the current owners, for well over a year.

Planning permission for the first set of plans was granted by Liverpool City  Council in 2004 and so with the AFL plans now revived the club do not need  to seek the green light a second time.

Given the AFL designs were drawn up some time ago, Liverpool have  "tweaked" the plans to bring the new stadium as up to date as possible  but  while staying within the parameters which gave them the go-ahead from the  local authority in the first place.

The stadium design plans of the  Hicks and Gillett-era were pulled  together by American firm HKS, but with the takeover of FSG those plans  were shelved as Liverpool continue to work towards the possibility of  moving away from their beloved  Anfield.

However,  the club is  continuing to look at the option of  staying where they are with the  development of the AFL scheme  in Stanley Park running  alongside the prospect of a  refurbishment of Anfield - but  such a decision is proving increasingly  difficult, so the main focus of the club  remains a new build.

Liverpool FC remain in constant dialogue with the City Council and are  making "reasonable progress" in finding a major brand to take up the  naming rights option of any new stadium.

A new build would cost in the region of £300m and given the current  financial climate  the 60,000 seater stadium is considered the most  appropriate decision at this stage, leaving the HKS plans of the doomed  previous regime out in the cold.

View original plans as published on LFC Online back in 2002