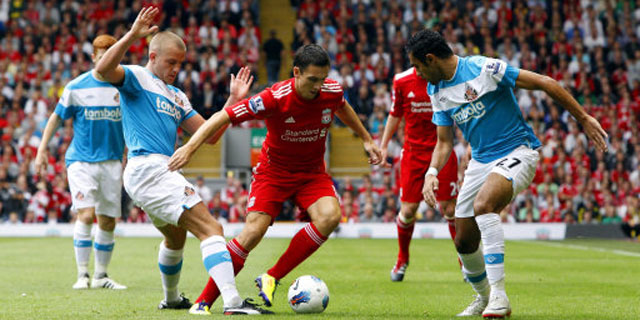 The 27-year-old player was alleged to have been involved in a row with an ex-girlfriend at a pub near his home town of Middlesbrough in the north-east of the country.

"Police were called to an incident at a pub on Yarm High Street shortly before 1am on Sunday, January 8," a police spokesman told the Liverpool Echo.

He made his first-team debut for his home town club in April, 2002, in a Premier League match at Ipswich Town.

Reports of Downing's arrest come at a difficult time for the English football giants.

On Saturday, 20-year-old man from the Aintree area of the city was arrested on suspicion of a racially aggravated public order offence during the team's FA Cup clash with Oldham.

The incident came as Liverpool are on the defensive over the handling of the Luis Suarez affair.

Adeyemi who is on loan from Premier League side Norwich, seemed to be in tears, and Liverpool captain Steven Gerrard moved across to the corner of the ground where the incident occurred, and comforted the 20-year-old.