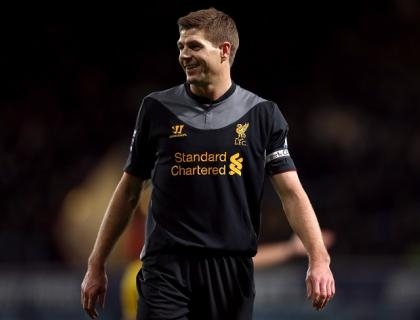 The Reds boss admits the England skipper has suffered slightly from rejoining pre-season later than others after Euro 2012. However, in recent weeks there has been a marked upturn in the 32-year-old's form and three goals in his last five matches has highlighted that, although probably more important has been his eight assists so far - one short of his career-best.

"Steven came back a wee bit later than most players (in pre-season)," said Rodgers. "It took the group who went to the Euros a wee bit of time to get going and you also have to respect the change of manager. It's never easy. As each day goes on he's growing in his confidence and his play, and it's no surprise [he's got eight assists]."

He added: "Over time our relationship has become very, very good and he's understanding the ideas of what we're trying to implement.

"I've got to say, his quality has never been in question. People obviously judge him on his goals, and maybe he has not scored as much as he has in the past, but the role and responsibility he has in this young team now is slightly different.

"People won't talk about that - they'll talk about his goals. But his job is to score goals, create goals and lead the team. For me, he's been 10 out of 10."

For a variety of reasons the focus is likely to be on top scorer Luis Suarez for Sunday's visit to face Manchester United, but Gerrard will be just as key, if not more so, as he has scored three goals in his last four league visits to Old Trafford.

He is level with former striker Robbie Fowler on six league goals against United and only Dick Forshaw (eight) and Harry Chambers and Gordon Hodgson (seven) have scored more league goals for Liverpool against their arch-rivals.

"What I've had from him is incredible leadership. He's a wonderful man," said Rodgers of his captain. "Everyone judges him by what he does on the field, which is world class but this is a guy who is world class off the field as well.

"He's a wonderful human being, and it's a real pleasure to work with someone like that."