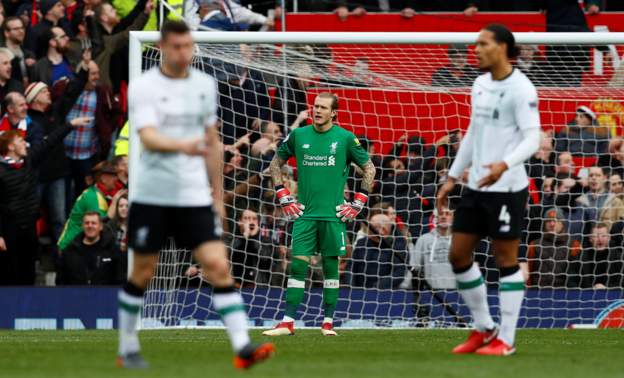 The Reds progress to the Champions League final eight, but then hand United victory on a plate. in 2018 bigotry remains in the game, with Uefa in charge it will likely remain the same. The Good, The Bad And The Ugly, another week reviewed at the world's favourite football club, Liverpool FC.

Liverpool's progress to the last eight in the Champions' League. An unspectacular home draw was sufficient to get the Reds into the quarter-final. Following the 0-5 demolition of FC Porto in the Estádio do Dragão, Tuesday's second leg was nothing more than a formality.

This wasn't the most spectacular match you'll ever see - as the scoreline suggests. However, the team done what was required. Virgil van Dijk and Mohamed Salah were kept on the bench, although the latter made an appearance after 74 minutes. Despite having two-thirds of the possession, Liverpool were unable to add to their five-goal lead. Not that said lead was ever under threat.

The visitors mustered only a single shot on target throughout the 90 minutes and this stat alone confirms that. Their appearance, apart from being obligatory, was simply to stop the aggregate score getting any worse. In that much, they succeeded.

No goals tonight, but the Reds are in the Champions League quarter-finals for the first time since 2009!

Liverpool now await their fate in the quarter-final draw which will take place on Friday 16th March at the UEFA headquarters in Nyon, Switzerland. It wouldn't surprise me if the Reds drew one of the Manchester teams or Roma, another great European foe of old. Whoever the opponent is, there should be no fear.

The team has reached this stage on merit, and deserve their place at the table just as much as any of the other illustrious names in the hat.

The loss to Manchester United yesterday. An utterly toothless display from Liverpool who, just handed victory to the hosts. It was simply a flat performance from the entire team. José Mourinho was busy scribbling notes on his pad. Jürgen Klopp was busy arguing with his players and the officials.

"Obviously to concede two almost identical goals was frustrating and it was difficult to break them down.."

This game was easy for Manyoo, and this was down to the weakness of Liverpool's defence.  It's almost a broken record now but Lovren is simply not good enough. Van Dijk would arguably have been a better match for Lukaku, but then he can't manage all of the attack by himself.

In the second half, when they had to pull their collective finger out, it seemed they were intent on trying to pass the ball through the centre of the crowded home defence. The Eric Bailly own goal came... as a result of a cross. But still, the team persisted to try the nonsensical And as a result, lose they deservedly did.

There will always be criticism of the referee. Liverpool could have had a couple of penalties  for a handball and a tug of the shirt on Salah. But, really? Had the scoreline been reversed let's face it, noone would have cared.

Without wanting to play the "ace of race" card, there are times when the issue of racism cannot be ignored. Uefa's decision not to take any action following the allegations of racial abuse suffered by Rhian Brewster. The incident, during the Under-17 Uefa Youth League game, against Spartak Moscow shows just  how weak and shambolic the game's leading body is.

Spartak Moscow and other Russian sides have been reported on many occasion for failing to stamp this behaviour out among their players and fans alike. However, it appears that very little if anything has been or evidently will ever be done. This, as a representative of the "Kick It Out" campaign said, will serve as no deterrent against future occurrences. If anything, has given the perpetrators "encouragement" to continue.

I have to say, I'm not surprised and with the current Uefa structure, it's unlikely to change in the foreseeable future. This so-called governing body is about as much use as a parachute made from string vests. Frankly none.