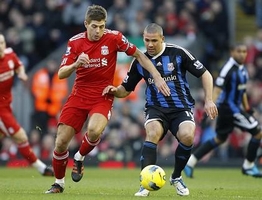 Saturday’s meeting of the two sides at Anfield was further evidence of why that will remain the case next year. Tony Pullis’s men marked their visit with a stifling lack of ambition and Kenny Dalglish’s side rewarded their approach by failing to bring to the game any individual creativity, or collective movement that might have punished it.

Dalglish had countered the absence of Daniel Agger by deploying a five-man defence with Skrtel, Carragher and Coates at its centre and Johnson and Enrique employed as wing backs. To the extent that the back line remained solid and the two wide men produced some attacking momentum the formation worked. The scoreline, and the fact that Thomas Sorenson in the Stoke goal was largely untroubled, illustrate the painful limit of its success.

The first half saw Liverpool, and Glen Johnson in particular, finding space and time on the right on enough occasions to have troubled the City keeper. However, the absence of runners into the box whether the ball was chipped, driven or threaded in from that side was glaring. The midfield trio of Gerrard, Adam and Henderson did not seem to co-ordinate their defensive and attacking responsibilities leaving Kuyt isolated in and around the penalty area. The Reds enjoyed almost endless possession, aided and abetted by Stoke’s willingness to give it straight back when it was ceded, but it remained unexploited due to a lack of effective movement off the ball. Instead Liverpool played in front of the massed ranks of Stoke's defence, failing to pull players out of position to create any space for themselves.

Dalglish chose to open the second half with the same formation before deciding he had seen enough by the fifty eighth minute when he replaced Downing with Carroll. This lifted the Anfield crowd, who had begun to express their frustration at the lack of invention and sloppiness in Liverpool’s approach work. Carroll initially went to ground on a couple of occasions due to a poor boot choice. It wasn’t long, however, before Robert Huth was wrestling him to the turf. Howard Webb ignored that appeal for a penalty and several others to follow, further animating the crowd. This increase in atmosphere and intensity from the red shirts on the pitch and in the stands almost received its reward in the seventy-sixth minute when Kuyt headed wide from Enrique’s deflected cross. This, however, marked the first and last clear-cut chance of the game and the fact that the Dutchman’s effort failed to hit the target from six yards summed up an afternoon of mediocrity.

The result left Liverpool in sixth place, seventh now following Newcastle’s win against QPR , and five points adrift of the Champions League places. Those are uncomfortable numbers for players and fans alike.  The period pre-Christmas to now, encompassing as it has the Suarez report and ban, Downing’s arrest and seven games in twenty five days including a cup semi final seemed to have taken its toll on Saturday. Too many players seemed off the pace, devoid of ideas and not comfortable with the formation Dalglish had gone with. The return of just three points from games against Wigan, Blackburn and Stoke in those seven fixtures has hurt the prospects of a top four finish. It is clearly not out of the question given Arsenal’s defensive frailty and Chelsea’s inconsistency but Liverpool need to discover a goal scoring edge to their game to match their defensive stability and to do so quickly.