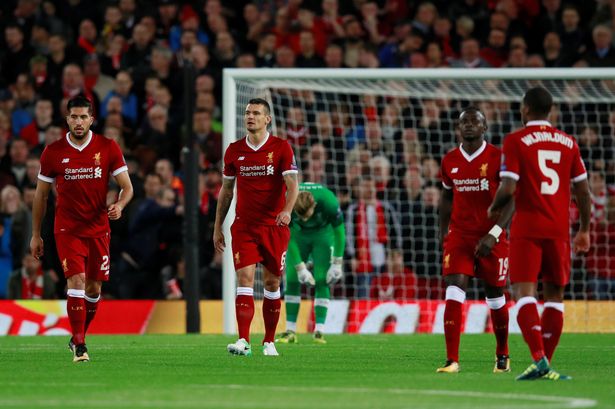 If any team could, this Liverpool team could. Salah and Mane have the ability to unpick defenders, turn over balls and create mayhem. Liverpool’s chances on goal kept coming and, for the most part, kept missing - Can and Moreno (who was offensively excellent) with chances to beat Sevilla’s shot stopper, and Firmino with a missed penalty (where’s Milner when you need him?)

Quite literally a plethora of opportunities for Liverpool to put the game out of sight for a tame Sevilla side. Twenty-four shots to Sevilla’s seven, but Sevilla only needed two on target. It’s not that Liverpool’s defensive unit conceded too many chances, its that when they did they were critical mistakes that lead to easy goals.  Sevilla were almost able to sneak a winner when Correa made something out of an average forward ball, firing just outside the post.

One feels that a third goal would have closed the game down, and given the current balance of this Liverpool team, would be necessary to ensure the three points. It didn’t come, the big chances of the first forty-five minutes weren’t as easy to find in the second, Liverpool looked flatter and had to work harder to create. Sevilla were playing for the inevitable mistake in Liverpool’s defense, and when it came, took advantage. We’ve all read this book before.

Come Sevilla’s equalizer, Liverpool looked tired - the dynamic midfield and attacking triumvirate needed substitution. The strength of Liverpool’s bench is in stark contrast to a year ago, Coutinho, Sturridge and Oxlade-Chamberlain can all be game-changing players, but coming on against Sevilla they were anonymous. Coutinho looked rusty, Sturridge absent and Ox short on time. Sevilla were able to close the game down and pick at Liverpool’s fragile defense.

The defensive lapse in the fifth minute and Firmino’s missed penalty were two pivot points of the game, both went against Liverpool, but penalty misses happen, even if James is the one taking them.

Dejan Lovren’s mistake is inexcusable. Five minutes into the Champions League proper and he produced a clearance akin to a schoolboy learning to keep his eye on the ball at football practice. He's a professional footballer, mistakes happen, but that error is an utter horror show. What is Jurgen to do? You can’t coach basics. If Van Dyk was to be Rolls Royce, what does that make Dejan? A Morris Marina? Sure he recovered, but starting a game one-nil down because your centre half can't control a simple ball doesn’t bode well for a season that should be made up of pushing for honours.

Without having reached ten games, and this could be an early diagnosis,  Jurgen could be facing a real headache at centre half. Sticking with Lovren because Klavan is the alternative isn’t the kind of decision he should be making. To date Klopp has spent a total of £4.2million on his centre halves since arriving. Manchester City probably spent more on private plane charters, transporting their new wing backs to the Etihad this summer. Without having the scouting knowledge that fans would hope Liverpool do, it’s not fair to pick transfer alternatives, but surely there are centre halves available who could prove themselves more reliable on a regular basis?

This result is a case of two points dropped for Liverpool, points that will become very valuable when the conversation turns to qualifying AND topping a group. This is a group that Liverpool could win, and in doing so avoid the top teams in the last sixteen. A draw isn’t the worst start to Liverpool's Champions League campaign, but trips to Russia and Spain could prove tricky, Liverpool have to be better at closing out smaller teams, don't allow them to score and don't allow them something to take from a game.

Liverpool have players who will score goals, now they just need a couple more who can do more to stop them going in. However you shake it, two against this Sevilla side should be enough.