​Through gritted teeth, gnawing his jaw as hard as humanly possible, fists clenched and blood boiling, Jurgen Klopp tells himself that he's happy that Liverpool weren't thrown out of the Carabao Cup.

In case you missed it, Pedro Chirivella came on as a second-half substitute in their third-round win at Milton Keynes Dons despite not having international clearance to play, leaving the Reds vulnerable to expulsion for flouting the rules. Klopp - noted hater of domestic trophies - told the media that if Liverpool broke the rules, well, then they deserved to be punished. Unfortunately for him, ​all they received was a (pricey) slap on the wrist, and they now face Arsenal at home in the next round.

So like a young schoolboy desperately trying to contract an illness to get out of a test, Klopp is probably searching for new ways to avoid progression in the competition before they accidentally win the whole thing - let's face it, Liverpool could try to lose to Arsenal and the Gunners would still be the ones heading out.

Luckily, he can read our handy guide on how to get DQ'd from the Cowabunga Cup. ​Liverpool's official punishment was a £100,000 fine with another £100,000 suspended. Clearly, the EFL want the Reds to know they were in the wrong but are giving them leeway with plausible deniability.

If Klopp wants out of the Qarabag Cup, he should simply remove that plausible deniability by playing Chirivella again.

In fact, start him. Make him captain. Tell the whole world your plan, Jurgen. Give the EFL no choice but to throw you out.

'Accidentally' Lose All Your Kits ​Arsenal will be heading to Anfield for the second time this season, presumably with their navy number again.

If Liverpool were to 'lose' their home kits for a home match, and 'lose' their white away kits so that the only option were to play in their black third strip, then surely the match wouldn't go ahead.

Better yet, just lose the kits altogether - if the EFL want to be like a strict PE teacher and make Liverpool play in their pants and socks, so be it.

It would probably also help in Liverpool's hopes of switching from New Balance to Nike if the former's kits don't even show up.

Get Jurgen Klopp's Mum to Write Him a Letter 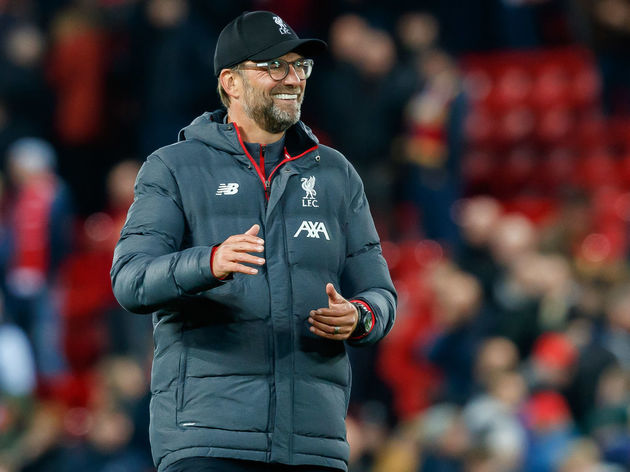 If school has taught us anything, it's that a letter from your mum can get you out of almost anything.

So, if Jurgen Klopp doesn't want to play in the Caribou Cup​, then we're sure a word from his mum will sort it out.

My son (Jurgen) is too sick to play in your competition today, please excuse him from the tournament.

Just Start a Fight with the Referee You know when Klopp's clapping the Kop and suddenly sees a camera so he starts punching the air? Imagine the force behind that - it could knock out the ref and yet still claim plausible deniability to reduce the 100-game touchline ban.

If it gets Liverpool thrown out of the ​Carragher Cup, then it's a risk Klopp would probably be willing to take.

Take Some Inspiration from Dodgeball We've all seen Dodgeball: A True Underdog Story, right? What do you mean you haven't? Grow up. Go watch it now.

The premise is that a local gym has to win a dodgeball tournament to raise money and save it from closing down. A group of plucky (largely unathletic and overweight) men have to win a regional qualifier first, and they come up against a team of Girl Scouts.

They lose the match, but are given a reprieve when one of the scouts tested positive for steroids and beaver tranquilizers. Several spoilers, but meh, it's old.

Look, we're not saying Liverpool players have to take banned substances, but if one of them volunteers to take that beaver tranquilizer (I'm looking at you Chirivella), it would see them removed from the Caramel Cup.

Ah, Roberto Rojas. How could a smart (dumb) plan go so wrong?

At the 1990 World Cup, ​Brazil and Chile played out a rather heated affair, to put it lightly. In need of a win but 1-0 down in the second half, Chile looked to the dark arts to help them out.

Goalkeeper Rojas went down with no one around him, and he was suddenly bleeding from his forehead. He was carried off and Chile refused to carry on playing in protest, believing Rojas had been hit by a firecracker from the Brazil fans, who were now facing disqualification.

However, what really happened was Rojas cut himself with a razor blade snuck onto the pitch, but video footage uncovered the hoax, and Chile were eliminated from Italia 90 and disqualified from the 1994 World Cup. Rojas was banned from football until 2001.

Now, this is another plan that would require someone in the Anfield dressing room to be sacrificed. But this is the Catalina Wine Mixer Cup we're talking about. Klopp needs someone to be brave, to take that pretty much career-ending ban. His eyes turn to Xherdan Shaqiri.