Brendan Rodgers on the Difference Between His Defences at Liverpool & Leicester

Leicester City coach Brendan Rodgers has perhaps taken a dig ​at Liverpool's hierarchy while discussing his fine defensive record with the Foxes this season.

Rodgers' Leicester have conceded just eight goals after 12 games in the Premier League in 2019/20, the fewest of any side in the English top flight.

Previously, Rodgers was lauded as an attack-minded coach at Swansea, Liverpool and Celtic, but one whose teams often came undone at the back. However, the Northern Irishman is challenging that perception with his start to life at ​Leicester. Following another clean sheet in the 2-0 win over Arsenal on Saturday, Rodgers defended his defensive nous, while hinting that he wasn't given good enough players at ​Liverpool.

He told reporters, via ​Metro: "I think if you look when I was in Scotland [with Celtic] we had defensive records as well.

"At Liverpool, of course, we were very good going forward, you have to ask did I have the players to defend how we’d want to defend?

"I think now at ​Liverpool they obviously invest a lot of money to get those types of players in.

"Here I’ve got a top-level centre-half in Jonny Evans, a young player in Caglar [Soyuncu] beside him who’s amazing. We’ve got a top European goalkeeper." 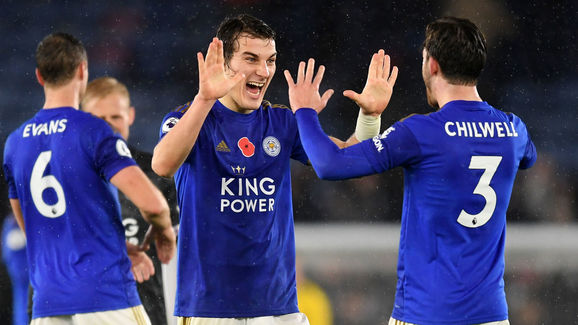 Liverpool famously spent £75m to sign PFA Player of Year Virgil van Dijk and another £67m for goalkeeper Alisson, with the duo helping to transform the Reds previously shaky backline.

In three years under Rodgers between 2012 and 2015, Liverpool signed nine defenders and two goalkeepers for a combined total of around £75m in transfer fees.

In 2013/14 Rodgers' Liverpool came close to winning the Premier League title but defensive frailties allowed Manchester City to sneak in in the final weeks. That season, the Reds scored an impressive 101 goals but conceded 51 - only two fewer than 16th-placed Hull City.