​Brighton manager Chris Hughton thought his side 'deserved something' from ​their 1-0 defeat to Liverpool.

In a game of few chances, Mohamed Salah's second-half penalty - after a foul on the Egyptian by Pascal Gross - proved the difference come full time, as the Reds inflicted Brighton's tenth league defeat of the season.

Despite the loss, Hughton was pleased with his team's performance, and believed they did enough to warrant a share of the spoils. 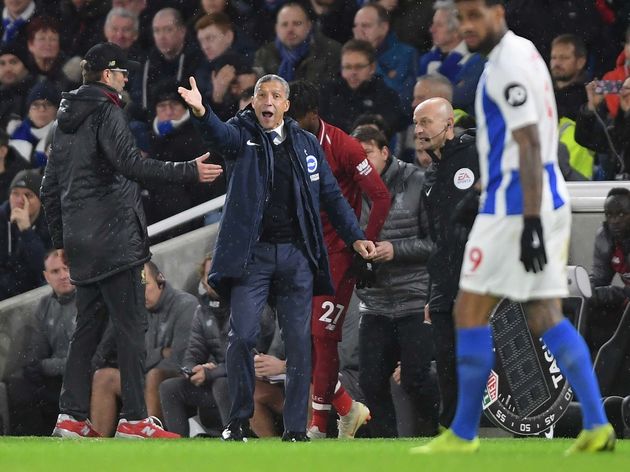 Speaking post-match, as quoted by ​Sky Sports, he said: "

"They are such a good side and the opportunities they had were when we were trying to get back into the game and put bodies forward and made the game a bit more open. I thought we restricted them to minimal chances.

"Pascal Gross' chance [a shot in the second half] was probably as good as any of their chances. We were always in the game and discipline was really good from the team, which it has to be because they can open you up.

"In the latter part of the game we went for it a bit and showed a real intent to get back on level terms and I thought for the feel of the game that we deserved something."

Brighton remain 13th in the Premier League despite the defeat, although their next game against Manchester United offers little hope of returning to winning ways, as the Seagulls have lost all eight away games they've play against the top six since their promotion in 2017.

Hughton also had a word to say regarding the referee, Kevin Friend, after the game, with the Brighton boss unhappy about the number of decisions that went against his side during play, although had no complaints about the award of Liverpool's penalty.

Chris Hughton on #LFC's pen: "I feel for Pascal. Mo Salah is probably the most dangerous player in those positions. No complaints."

He said: "I feel for Pascal. Mo Salah is probably the most difficult player in that position one-on-one. No complaints."

"I felt today it was one of those days. No malice or anything towards the referee but I thought the bulk of decisions favoured Liverpool today."