If you follow football, you probably don't need a recap on why so many fans were looking forward to Sunday's Community Shield. But we'll give you one anyway.

Manchester City versus Liverpool is now the standout fixture in English football, and if there's a better way to get the season started than by pitting Pep Guardiola against Jurgen Klopp, we're yet to see it.

City, the treble winners, tipped by many to again retain their Premier League title after more smart summer business, against the Reds, iconic Champions League winners set to give their rivals as tough a time in the race for England's top flight as they did last time out. 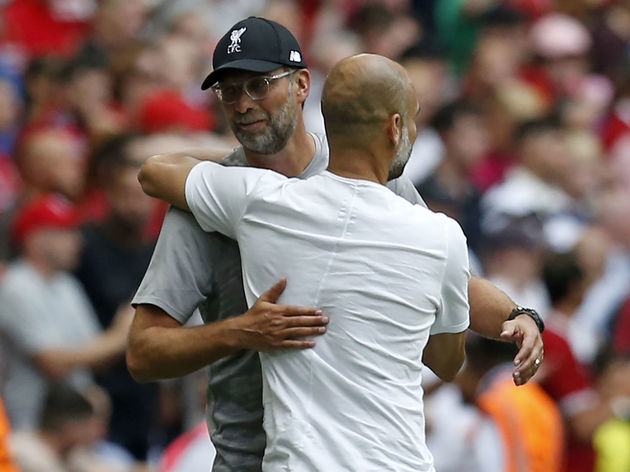 But it was ​City who struck the first defining blow of the afternoon, Raheem Sterling scoring against his old club for the first time since leaving Anfield. The goal could have been avoided had Alisson decided not to let his arms turn into spaghetti, but City's bright start more than warranted their advantage on the scoreboard.

And yet, for City's slickness in the opening 20 minutes, with Kevin De Bruyne in particular brilliant throughout, they showed definite signs of ring rust as the game went on, almost dropping down to Liverpool's level after a dominant start as the Reds started to claw their way back into the game.

For much of the afternoon, the game proved to be an inconclusive look at the upcoming title battle between the Premier League's top two teams. Mohamed Salah was somehow slick and sloppy simultaneously, often jinking past City defenders in tight spots with the agility and guile of Lionel Messi, yet he missed three favourable opportunities in the first 30 minutes. A few more games in those legs and he probably would have buried all three.

Similarly, ​Sterling ran England teammate Trent Alexander-Arnold ragged all afternoon and got his goal early on, but also smacked the post when well placed and butchered a one-on-one against Alisson when sent through on goal.

​Liverpool got more of a foothold as the game went on and eventually equalised from a set piece, Virgil van Dijk hooking the ball back across goal for his centre back partner Joel Matip to convert. However, one shouldn't be too quick to think City's victory marks them out as overwhelming league favourites heading into the new season because that's not the City we saw on Sunday. They were by no stretch of the imagination bad, but they will be grateful to have another six days to fine-tune a few loose strings before their league title defence starts against West Ham. Liverpool, on the other hand, had the chances to win the match, but their spell of heavy pressure in the second half only amounted to one goal, much to the frustration of their raucous fans.

Disregarding the penalty misfortune, Liverpool showed again that they can match the biggest competitors going, and while a summer lacking any major arrivals may come across as lackadaisical or lazy, their starting XI is still one City will fear, given some of the previous encounters between the two sides.

Not only was the match a brilliant watch but it also, perhaps somewhat frustratingly for some, gave us little more to judge what the title race might look like or who the definitive favourites are.

It's foggy at best, and that's what makes it all so enticing.