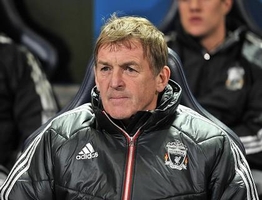 Mark Davies and Nigel Reo-Coker were able to put their side 2-0 up inside half an hour and although Craig Bellamy's seventh of the season reduced the deficit, Gretar Steinsson restored the two-goal cushion just five minutes into the second half.

For the first time since returning as Reds boss just over a year ago, the Scot publicly criticised his squad. He said: "There is no-one at this football club who doesn't have respect for other people. If that was what the problem was, if they thought this game was not as important as the next one, then fine - but they won't be here."

Dalglish believes they were distracted by Wednesday's forthcoming Carling Cup semi-final second leg against Manchester City, which they go into holding a slender 1-0 lead, and the FA Cup fourth round tie at home to Manchester United next weekend.

"It is built on the philosophy that the next game is the most important one, not the one that is two or three down the line. If they needed a lesson to be taught to them then this was it. If they think they can just turn up and get a result and not be competitive and not match the opposition for effort and then they have had a lesson.

Wanderers made it 10 points from their last six matches to lift themselves out of the bottom three and manager Owen Coyle was delighted not just with the result but the performance.

"When you play a club of the stature of Liverpool sometimes you can get a result and sometimes you ride your luck but nothing could be further from the truth," he said.

"We were in good form coming into the game so we had great belief in the way we went about it. We believed we could win. The great thing was not just the win but how we won. It was a team performance.

"I can't say it was pleasurable, having a late kick-off and watching the results come in. When you are second-bottom of the league it is quite agonising but when the dust settled we knew a win would take us out of the bottom three."