In the grand scheme of things, the three-and-a-half years between July 2007 and January 2011 were a manifestly average time to be a Liverpool fan.

They weren't particularly dark - those years were still to come - and they weren't particularly great either, with no trophies and just a Premier League runners up award to shout about. With no Istanbul but also no 'Stoke City 6-1 Liverpool', they were the 'meh' years of the club's modern history. Or, rather, they would have been, if not for one man.

On Friday Fernando Torres ​announced that he would be bringing to an end a career that hasn't gone his way since his move to Chelsea in 2011. The eight years since have seen a return to Atletico Madrid, sprinkled with two loan spells with AC Milan and a move to Sagan Tosu in Japan, but although his fortunes have been mixed (at best), it speaks to the enduring mark he left at the peak of his powers that no-one really cares.

I have something very important to announce. After 18 exciting years, the time has come to put an end to my football career. Next Sunday, the 23rd at 10:00AM, local time in Japan, I will have a press conference in Tokyo to explain all the details.See you there. pic.twitter.com/WrKnvRTUIu

He might not have had the lasting impact that the one-time Atletico prospect promised to when he arrived in the Premier League in 2007, with injuries playing a significant part in that. The likes of Didier Drogba, Robin van Persie and another Atleti alumnus Sergio Aguero might be remembered as having better careers.

None of it really matters, however, because when you think of Fernando Torres, you think of 33 goals in his first season in England, and his partnership with Steven Gerrard. You think of that goal against Blackburn Rovers, and the goalscoring antics that fired Spain to Euro 2008.

It was the manner of his goals, and his passionate demeanour, more than the actual numbers themselves,

Here's a look back at a STUNNING El Nino special. 😍 pic.twitter.com/4JtWElb20W

It all started in his first game at Anfield, after hit then-club record move from Atletico Madrid. After a quiet debut away at Aston Villa on the opening day, the 23-year-old took just 15 minutes to get off the mark on home turf.

Taking a through ball from Gerrard in his stride, he left Tal Ben Haim in his wake before slotting past Petr Cech to give his new side the lead, and we saw the first Anfield iteration of his iconic knee-slide celebration.

Speaking to FourFourTwo years later, he admitted that he knew, there and then, that he would hit 20 goals that season. His prophecy, of course, would come true, as he became the first Red since Robbie Fowler to clear the 20 mark in a league season, finishing on 24 in the Premier League, and 33 in all competitions. 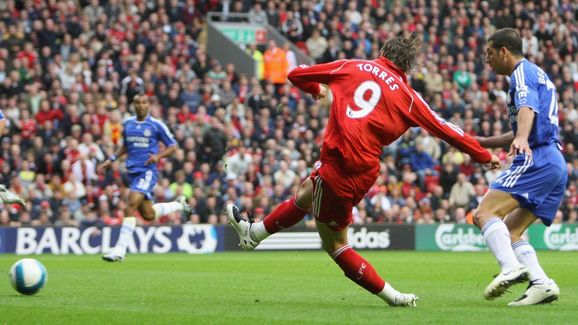 He would follow that up by scoring the winning goal in the final of Euro 2008, as Spain won the first of three consecutive major trophies thanks to his 33rd-minute opener against Germany.

Although the season that followed featured the first sign of the injuries that would plague him in later years, it would still be unfair to call it anything other than a smashing success.

He netted 17 goals in 38 appearances throughout the 2008/09 campaign, finding the net in some of the iconic matches that would define an otherwise average era. His role in the 4-0 destruction of Real Madrid in the Champions League quarter-finals, firing in the opening goal, will live long in the memory, as will his equalising goal at Old Trafford, in the famous 4-1 derby win as he terrorised a bewildered Nemanja Vidic.

33 - In Fernando Torres' debut season with Liverpool in 2007-08, the Spaniard scored 33 goals; only Mohamed Salah (44 in 2017-18) has ever scored more in his debut season for the Reds. Retiring. pic.twitter.com/vHHAzTp0wB

By now, his figure was an iconic one at Anfield, as the long-sleeved number nine shirt draped around the assured forward with the slicked-back, dirty-blond hair is an image that inspired an obsession with football among many young minds at the time.

He left the club 58 games and 31 goals later, but as evidenced by the outpouring of support displayed upon his retirement, even the sacrilegious nature of his departure for Chelsea failed to sully his name.

Happy retirement @Torres! Thanks for the memories! 

樂 What is your favourite Torres moment in the #UCL? pic.twitter.com/0nYqvZaPn9

His career wasn't perfect, but El Nino's legacy has persevered through injury, controversy and a lack of title-winning success - at ​Liverpool, at least - to remain thought of at Anfield in the highest possible regard.