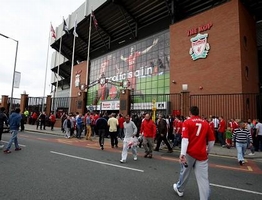 The fixture has always been a fractious one, but Luis Suarez's eight-match ban after being found guilty of racially abusing Patrice Evra has contributed to the ill-feeling between rival fans. Add to that United's ticket allocation, under FA Cup rules, of almost 6,000 is more than double what they usually receive and the potential for anti-social behaviour is heightened.

The Merseyside force say their policing style will be "firm, fair and friendly". Match commander chief superintendent Jon Ward said in a statement: "We are expecting a lively atmosphere at Saturday's match, but our intention is that at the end of the day we will be talking about the game and what happened on the pitch as opposed to off the pitch."

He added: "As always, my officers will be dealing with the fans as they would expect to be treated themselves. Our policing style will be firm, fair and friendly, but we will take action where necessary against those individuals who may seek to cause problems or misbehave.

"We work closely with both clubs, Greater Manchester Police and the Football Supporters Federation and, if it's brought to our attention, any inappropriate remarks and behaviour will be acted upon.

"We take all forms of offensive behaviour seriously, and we will always thoroughly investigate such claims. We cannot allow this type of behaviour to affect the enjoyment of genuine fans, especially families with young children who attend the game.

"We will continue with our efforts to deal with the small number of individuals who commit offences at football matches, in particular with the continued use of football-banning orders."

Ward, in a statement published on liverpoolfc.tv, added: "At the last Liverpool v Manchester United game at Anfield the behaviour of the majority of the fans was very good.

"We know that this match will be a busy operation and we hope that at Saturday's match they will continue to act as ambassadors for their clubs and for the city and enjoy what I am sure will be a good game.

"As usual we would ask fans with tickets to arrive at the ground as early as possible. Fans without tickets should not attend at all; they will not be allowed entry into the stadium."