Liverpool captain Jordan Henderson​ was filmed in an emotional embrace with his father after winning the Champions League final on Saturday night.

The 2-0 victory over Tottenham marked Henderson's second trophy as a Reds player, and first as captain, while it was clearly an emotional night for the 28-year-old.

Henderson endured a difficult start to his time at ​Liverpool, with former sporting director ​Damien Comolli revealing he was sacked in part for his decision to sign the midfielder. 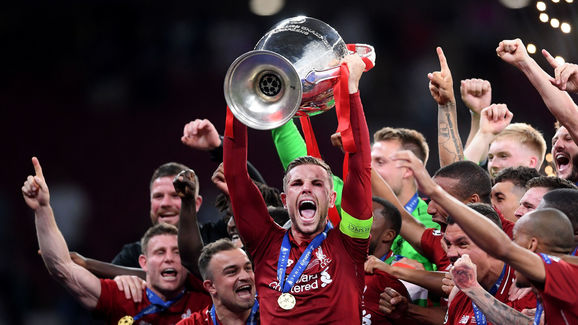 Sir Alex Ferguson famously also criticised Henderson's running style in his autobiography, while the former Sunderland star was once almost sold to Fulham in an exchange deal for Clint Dempsey.

Video producer Charlie Gibson caught the moment as Henderson, wearing his medal around his neck, sought out his dad Brian for an emotional hug at the side of the Wanda Metropolitano pitch.

He broke down in tears with his dad at the final whistle...

Brian Henderson later told ​Optus Sport of a promise his son made to him many years ago.

He said: "When he was 10 I took him to see a Champions League final between the two Milans at Man Utd and he said to us, when they came out to the Champions League music, he said 'dad I'm going to play there one day.'

"He's done it not once, but twice. And he's won one. I'm absolutely delighted for him."

Jordan Henderson used to want to win the FA Cup with Sunderland before he’s 30.

"I am the proudest man in the world. Absolutely," he added of his son's achievement.

"Everybody was dead on their feet but they came through and I'm just so proud. Unbelievably proud."

"It's just very emotional, the tears come, you start shaking, you grab your wife, you grab your daughter-in-law, you grab anybody that's around you. I'm just so, so happy."