​Liverpool midfielder Jordan Henderson suffered a twisted ankle in the Reds' famous 3-1 win over Bayern Munich on Wednesday night, and Jurgen Klopp admitted that the injury cast a 'little shadow' over an otherwise grand night.

Henderson was forced off after just 13 minutes at the Allianz Arena, as Liverpool searched for an away goal after a 0-0 stalemate in the first leg, but it didn't dampen their spirits in Munich as they secured a spot in the Champions League quarter finals thanks to goals from Sadio Mane and Virgil van Dijk. 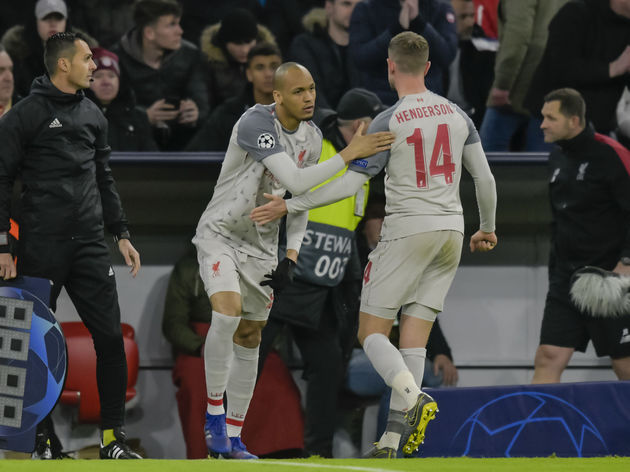 Speaking after the game to ​​Liverpool's ​official website, Klopp confirmed the captain's injury and admitted that it has taken some of the gloss off the famous victory.

"It's a big night with a little shadow that is Hendo's twisted ankle," Klopp said.

"It's Hendo so he's a hard one, but we have to see, of course. It looks hopefully not that serious but for tonight we had to change."

Fabinho coming on for Henderson was the best thing that happened for us. Sorry but it’s true. #BAYLIV

​Fabinho was benched for the trip to Germany after seven successive starts, but the Brazilian was quickly brought into the action after ​Henderson collided with ​Bayern's ​James Rodriguez, leaving him unable to continue and altering Klopp's game plan.

"That's always a bad sign for a game, when you have to change early," Klopp added. "We trained with him there in that position - we wanted to, not to rest Fabinho, but we wanted to bring in fresh legs and Hendo had fresh legs but unfortunately that didn't help with the ankle."

Although he doesn't start every week, Henderson is still the club captain and his tenacity will be missed as the Reds enter the season's money-time, chasing down ​Manchester City for the first title Anfield would have seen for 29 years.

Jordan Henderson was able to leave the stadium without any need for crutches; his injury is nothing too serious but it will almost certainly rule him out of Sunday's trip to Fulham

The extent of Henderson's injury is not yet known but it is highly unlikely that the 28-year-old will be fit to make the trip to Craven Cottage to face ​Fulham in the Premier League on Sunday, and it could also rule him out of this month's Euro 2020 qualifiers.