Jurgen Klopp has insisted that Liverpool’s young stars have a bright future as the Reds boss prepares to shake his side up for Monday’s FA Cup third round clash with Wolves – though the clash may come too soon for Ki-Jana Hoever.

The 16-year-old full back has been in training with Klopp’s senior setup and is said to have made storming progress since joining from Ajax recently. Meanwhile, Liverpool’s senior stars are leading the charge for Klopp’s side in their bid to claim a first league title since 1990.

The Reds also return to Champions League football next month, but the FA Cup will take focus for ​Liverpool on Monday and Klopp said of Hoever’s potential involvement against ​Wolves, via ​Sky Sports: “He’s one for the future, of course.

“But what we will do with him now for the game, I don’t know. If Joel [Matip] and Joe [Gomez] would have been fit all the time now then probably Ki-Jana would not have been in training. Now he was in and still is in, it’s just a joy to watch him.

“He’s an incredible, confident, young fella and he’s really a good player on top. That we can see him day in, day out is really cool.

“For sure for the future. When the future starts? I don’t know. But he’s in, he learns a lot, he improves and it will happen automatically.

“It’s a nice prospect for the next month and years. I don’t know [whether he will be involved for Wolves]. We will see.”

Though the extent of Hoever’s involvement at Molineux on Monday night remains to be seen, Klopp is set to include U23 stars Curtis Jones and Rafael Camacho for the FA Cup clash, with each yet to make their senior debuts for Liverpool.

Jürgen Klopp has been nominated for @premierleague​ Manager of the Month, after winning all seven games in December.

“Curtis is another good example, he’s just a fantastic player,” Klopp added. “He is now with us since February last year ands it’s just brilliant to have them around.

“Rafa Camacho is the same. We have a lot of these young boys constantly around and I’m really happy about that, but they have all the time in the world.

Paul Merson: “The quicker Liverpool go out of the Champions League, the more of an unbelievable chance they have to win the league.”

Louis Van Gaal to Dutch TV after viewing the clip of Merson: “This man is not normal. Liverpool shouldn’t take his bad advice into consideration.” pic.twitter.com/vrVhp2rgvN

“They are really young and it is not about pushing them into a situation. The good thing is that if one of these boys will play on Monday, then it is all my responsibility.

“They only have the opportunity to show up and play football and all the things that don’t work are my responsibility and my fault because then I made the wrong decision and they were not ready, that’s how it is. 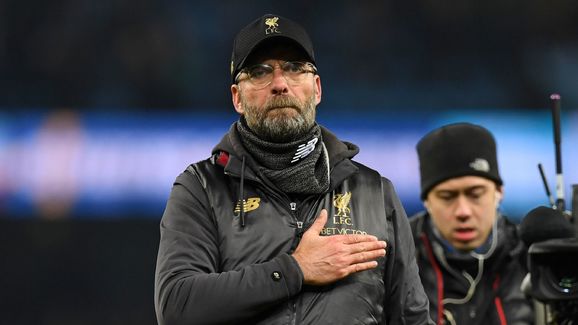