Jurgen Klopp provided further updates on Liverpool's ​injured stars ahead of the weekend clash against Tottenham Hotspur, with Fabinho and Dejan Lovren close to returning to first-team training.

Unsurprisingly, a packed festive schedule did not leave the Reds unscathed, with Fabinho and Lovren joined by James Milner, Naby Keita, Xherdan Shaqiri and Joel Matip on the treatment table.

Despite sitting pretty atop the Premier League table, unbeaten and 13 points clear of nearest challengers Leicester, ​Liverpool face a testing patch of fixtures this month - starting with ​Tottenham away on Saturday - which could have a big say in how their season pans out. Speaking to the press ahead of Liverpool's first-ever trip to the new Tottenham Hotspur Stadium this weekend, Klopp gave status updates on all his injured players, ruling Keita and Milner out of Saturday's game, but providing more positive news on Fabinho and Lovren.

Klopp said, via the ​Liverpool Echo: "James [Milner] and Naby [Keita] not available. Muscle injuries. We will see. Not for this weekend or next then we will see.

"Joel [Matip] was outside on the pitch but doing his own stuff. Yesterday day was the first part of training. Shaq trained normal. Dejan [Lovren] and Fab next week in full training.
​
​"Dejan and Fab worked really hard lately, we will see for the ​Man Utd game. Clyney is in a good way but not ready." 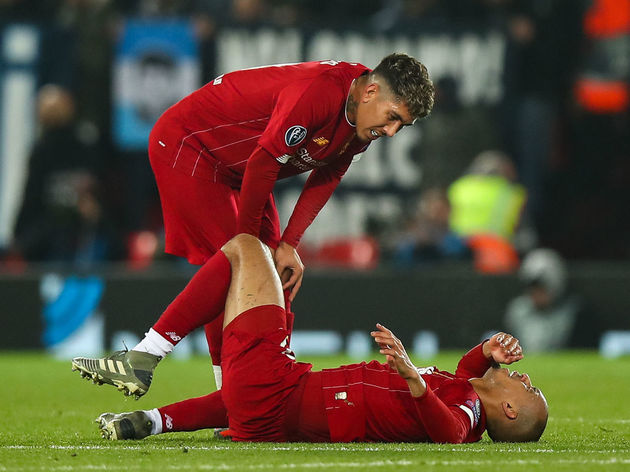 Klopp will want his squad at full strength for the near future, with Saturday's trip to Tottenham followed by the visit of Man Utd (19/1) and a tricky away tie against Wolves (23/1).

The FA Cup fourth round (26/1) and a rescheduled trip to West Ham closes out the month (29/1), while February brings the return of the Champions League knockout stages for Liverpool.

Tottenham - currently sixth in the ​Premier League table - have their own injury problems, with Harry Kane headlining their list of absentees. Tanguy Ndombele, Moussa Sissoko, Ben Davies and Hugo Lloris are all also ruled out.