Ahead of Sunday’s Merseyside derby, Liverpool have already endured a busy week. The Reds recorded an impressive 3-0 win away to Watford in the Premier League last weekend before being edged out by an impressive PSG side in the French capital on Wednesday.

Jurgen Klopp says Marco Silva has built the strongest @Everton squad he has faced during his @LFC reign.

That 2-1 defeat was a setback to Klopp’s side in the Champions League, but ​Liverpool remain unbeaten in the Premier League this season. Ahead of this weekend’s huge Merseyside derby at Anfield, Klopp spoke of his change in approach, and told ​Sky Sports: “Coaches want to coach.

“That is why we are good at it and that is why we have made our way up in the game. Then you get to the highest level and most of the time it is meetings.

“The job becomes more about getting the message across in those meetings rather than on the pitch. It is a big difference and you have to get used to that.”

Everton lit up Liverpool’s Royal Liver Building in blue ahead of this Sunday's Merseyside Derby, live on Sky Sports.

Klopp has brought a new era of competitiveness and a renewed identity to Liverpool since arriving at Anfield in 2015, and though the 51-year-old admits the job has brought improvements in him as a manager, the priority focus remains on Liverpool progressing.

“The job is massively and completely different and that makes me a much better manager than I was when I started,” Klopp added. “A lot of teams saw that we were good at that [Liverpool’s counter-pressing style] and realised they were overplaying.

“If the team gives us the opportunity to do it we will still be there with the counter-press. But very often it is not possible.

“It means that now we have to control more games. We have to keep the ball, especially against counter-attacking sides.

“That may change in the second part of the season when opponents who are down the table need the points and so they will need to open up a bit more.

“But at this moment we have to control games and be patient but in a very lively way. This was a big part of our thinking in pre-season as well. We really said that.

“It’s like we were so lively in the past that the moment we couldn’t be lively because there was no space for that it was like there was immediately this drop in concentration.

“That is not allowed. I like it more now actually. It is more mature. That was the next step for us. So far so good.”

Liverpool’s huge derby clash with ​Everton on Sunday is the start of a huge festive period which could in many ways begin to define the Reds’ season.

.@LFC's iconic red home shirt has had some sleek designs in the @premierleague era, but which is your favourite? 樂

Take a look at our interactive preview of the Merseyside derby here: https://t.co/2CQoehxVsh pic.twitter.com/ohOVPWJSt4

Klopp’s side face an all or nothing Champions League encounter with ​Napoli this month, before taking on ​Manchester City in a meeting between the Premier League’s top two.

Liverpool’s schedule offers little opportunity for relaxation over Christmas, and Klopp admitted: “My missus asked me when I am having a day off and I don’t see it. I had to make the plans quite a long time ahead and I didn’t see a day off. Not this year. 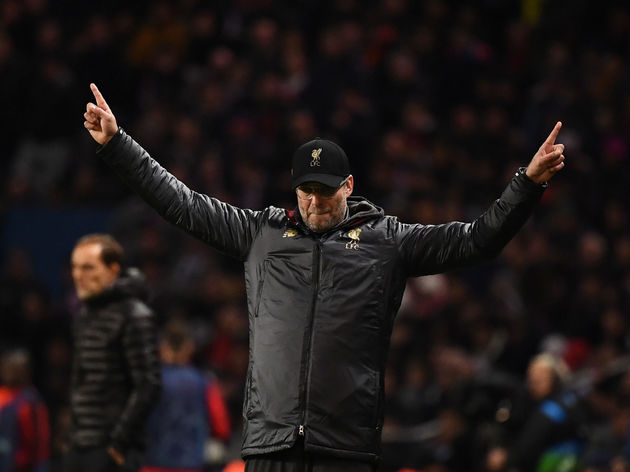 “We cannot go home to Germany. I will be at home in Liverpool but Christmas will be celebrated in hours not days.”