Henderson was somewhat of a surprise starter against City and the selection was not vindicated as Liverpool ended up falling to a 2-1 defeat. The Reds' skipper lined up against an all-action City midfield consisting of Fernandinho, David Silva and Bernardo Silva.

With Bernardo Silva covering an astonishing 13.7km during the heavyweight clash, Kilbane felt that Henderson's lack of fitness was all too clear to see.

Speaking to the Daily Mail, he said: Fernandinho

"His passing and ability to get round the pitch have always been underrated but City were not as good without him in the side which showed when they lost in his absence at Leicester.

"All the wonderful players can work their magic because Fernandinho can make passes and open up a game. 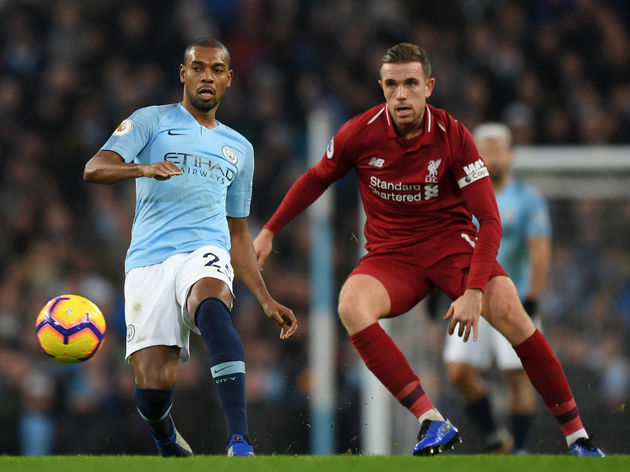 "I am not saying they would have lost against Liverpool

"By comparison, Jordan Henderson doesn't look fit enough to me and has not been getting around the pitch as well as I've seen him in the past."

Whilst Kilbane was critical of Henderson's performance against Manchester City, the former Republic of Ireland international was in awe of Fernandinho and Bernardo Silva.

He added: "There was so little between the two teams and I thought Liverpool were the better side for the first 15 to 20 minutes and they caused Manchester City

"But City were able to stop the attacks which was down to Fernandinho. "When Liverpool got momentum he became more effective on quick turnovers and I thought Bernardo Silva was brilliant again. He gets better and better and has been City's best player this season so far and certainly the one I have enjoyed watching the most."

Liverpool's next task is an away trip to Wolves "The German won't get too ahead of himself but he will know that, after the cup tie, Liverpool's next five league games are all winnable.

"After Brighton, the Merseysiders have Crystal Palace (home), Leicester (home), West Ham (away) and Bournemouth (home) before their Champions League tie with Bayern MunichManchester United

"I am a traditionalist and still believe that the FA Cup is a fabulous competition, but if Liverpool were knocked out at Molineux, it wouldn't be the worst thing to happen."

Jürgen Klopp has been nominated for @premierleague​ Manager of the Month, after winning all seven games in December.

Liverpool continue their quest for the Premier League title on Saturday with an away trip to Brighton. With the margin between Manchester City and the Reds just four points now, Klopp will be desperate to see his side consolidate their lead.