​Liverpool goalkeeper Alisson has claimed that Manchester City are still favourites to win the Premier League title this season, despite Pep Guardiola's side currently lagging four points behind the Reds.

With 23 matches of the league season under their belts, Jürgen Klopp's side have emerged as strong title contenders. Their defence has come on leaps and bounds from last season, with the heart over head displays of the previous campaign being replaced by calculated, disciplined efforts. The Reds have lost just once this season, and conceded a mere 13 goals.

Discussing the enthralling title race, via Goal, Alisson was keen for his side not to get carried away, and said: "​Liverpool now have the quality to fight for the biggest trophies, there is no doubt about it. But there’s a long way ahead of us and it’s important to be sure where we are going. (Manchester) ​City proved their strength by winning the league comfortably last year.

"They have also invested for this season, so their team is even better now. They are very tough opponents and the big favourites. However, we also have our ambition to win the league this season and I believe in our talent to go all the way. But we have to think step by step and make sure we keep our feet on the ground." 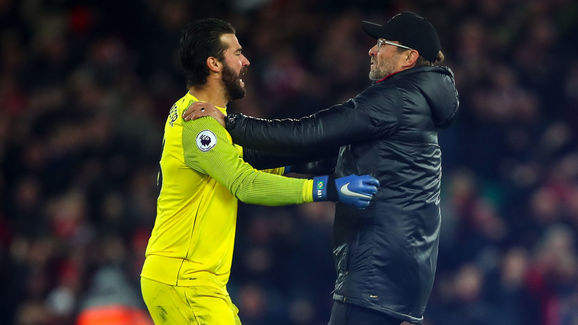 Having had the FA Cup weekend to recuperate, Klopp's side resume their ​Premier League duties on Wednesday evening, when they host Leicester City. Certainly, winning the title is well within the Reds' grasp, but they'll be wary of the challenges still to come, with a trip to face Ole Gunnar Solskjær's rejuvenated ​Manchester United side on the horizon next month.

In other news, ​Klopp has claimed he's open to receiving offers for youngster Ben Woodburn this month. The Welsh youngster had a temporary spell with ​Championship side Sheffield United ended by an ankle earlier in the season, but the player is now back in training, and his manager is now keen for him to secure regular first team football elsewhere.