​There's the small matter of first versus second in the Premier League this Sunday as leaders Liverpool welcome champions Manchester City to Anfield.

The encounter will have an enormous bearing on the destination of this season's title, with the Reds currently holding a six-point lead over the Sky Blues. Jurgen Klopp's men could open up a massive gap between themselves and the chasing pack if they can down the Cityzens, though it was the Mancunians who had the better of it last term. Pep Guardiola oversaw a 0-0 draw on Merseyside in their first meeting of the 2018/19 campaign, before his side secured a pivotal 2-1 victory at the Etihad Stadium in January. Should they defeat the ​Reds once again then we have a tantalising title-race on our hands.

It took plenty of soul searching, but 90min have reached a conclusion on a combined XI of players available for the weekend's showdown. 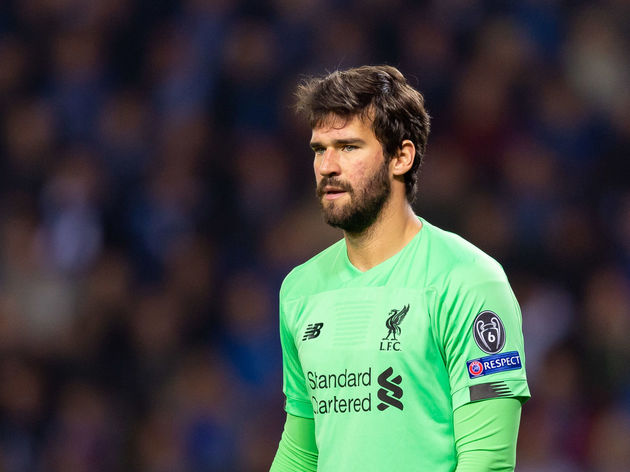 Alisson (GK) - With ​City shot-stopper Ederson a major doubt for the clash after picking up an injury during the 1-1 draw away to Atalanta on Wednesday night, there can be no doubt about who's number one. Yes, it's Kyle Walker... Sorry, Alisson. Definitely Alisson.

Trent Alexander-Arnold (RB) - In his 14 games in the ​Premier League and ​Champions League this year, the ever-improving Alexander-Arnold has racked up four assists - an impressive tally for a right-back. With such wondrous crossing ability and strong decision-making skills, he can certainly surpass the 16 he got in all competitions last season.

Joel Matip (CB) - Rewind 12 months and the thought of Matip starting ahead of Joe Gomez would have sounded like a cringeworthy dad joke. Now, the Cameroonian has become a towering presence at the back for Liverpool, occasionally outshining even Virgil van Dijk.

Virgil van Dijk (CB) - Given Aymeric Laporte's absence and the underwhelming form of John Stones and Nicolas Otamendi, it should be no surprise to see the central defence filled with Klopp's men. Everyone knows Van Dijk's talents, there is no need to make an argument for his inclusion.

Andy Robertson (LB) - Benjamin Mendy looks a shadow of the player he was at Monaco and Oleksandr Zinchenko is injured, while Walker is error-prone enough at right-back, so there's no need to switch him to the left. Besides, Robertson is a phenomenal force in attack and defence, comfortably securing his place in this side. Fabinho (CDM) - As he enters the twilight of his career, it's becoming increasingly obvious that Fernandinho's powers are beginning to fade. He remains a marvellous destroyer at the base of midfielder, but that is a role his countryman is performing to a higher standard under Klopp. Having been made to wait for an opportunity at Anfield, Fabinho is now an integral component of the side.

Kevin De Bruyne (RCM) - This is one simply isn't up for debate. On his day, De Bruyne is hands-down the finest footballer in England, effortlessly finding teammates with passes that make your jaw drop. On top of that, he is devastating at shooting with either foot from any distance. A staggeringly good player - we're truly blessed to witness him at his peak.

Bernardo Silva (LCM) - Admittedly, Bernardo has not been at the spectacular levels of yesteryear, though no one doubts the Portuguese magician's capabilities. Jordan Henderson and Georginio Wijnaldum are hard workers and add a huge amount to the Liverpool engine room, but Silva is equally tireless and has a skill-set that far surpasses those of his counterparts. Raheem Sterling (RW) - City sensation Sterling has the ​potential to win the Ballon d'Or as he continues to blossom under Guardiola's tutelage. Whereas before there were many, now there are very few faults in his game. The 24-year-old has honed himself and become one of the Catalan's greatest success stories since he arrived from Anfield.

Sergio Aguero (ST) - For the entire duration of his eight-year career at the Etihad, Aguero has been absolutely lethal. He has the best goals-to-minutes ratio in Premier League history, demonstrating what an extraordinary finisher he is. Only after Kun has left England will we truly appreciate his breathtaking talent.

Sadio Mané (LW) - The Sky Blues should fear Mané this weekend in light of comments made by Guardiola, who has since backtracked on his claim that the forward likes a dive or two. You do not want to get the Senegalese star fired up. Watching Mané play, you start to run out of ways to describe his performances. Electric, unstoppable, unmissable... how about world-class?