​Liverpool midfielder Georginio Wijnaldum raised more than a few laughs when he caught a fan unawares on Friday, filming a Feyenoord supporter composing a tweet about him, before uploading the footage to his Instagram story.

The 28-year-old was on his way back to Liverpool from the Reds' training camp in Qatar, when he caught a glimpse of an unsuspecting fan typing out a tweet expressing that he was '99% sure' he'd seen the midfielder on his flight.

“99% sure Georginio Wijnaldum is on my flight”

Gini catching someone tweeting about him 😭😭 pic.twitter.com/t1FTv5kFg5

He was all too correct, it seems, as the midfielder was sat directly behind him and humorously zoomed in as the supporter composed and sent the 'offending' tweet, before uploading the footage, captioned 'busted.'

All's well that ends well, however, as the ​BBC were able to catch up with the assailant - Feyenoord fan Ben - who said he shared a laugh with the midfielder, and bonded over their mutual love for the club where Wijnaldum started his career.

"I saw he caught me just before we took off and we had a laugh about it. 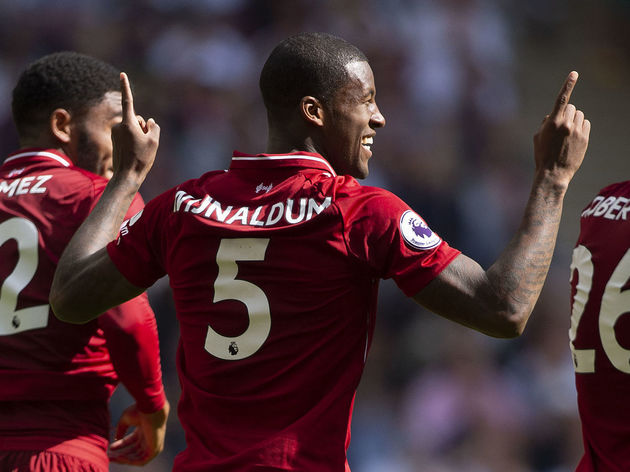 "When we got off I showed him my Twitter mentions exploding and he was laughing.

"We spoke about the Feyenoord-Ajax game on Sunday and he mentioned he'd be watching after training.

"Honestly I was pretty embarrassed about it but he couldn't have been nicer, really top guy. He had photos with plenty of fans. I forgive him for killing my Twitter mentions."

Wijnaldum is well-placed to face Leicester. “Gini is good, better. The plan is that he will have one session today and then we have to see how he reacts on that. Hopefully we can build from that point.” #LFC

Wijnaldum and ​Liverpool have a weekend off after crashing out of the FA Cup against ​Wolves earlier this month, but face ​Leicester on Wednesday as they look to maintain their title challenge.