The Reds earned their place in the Champions League quarter final with a 3-1 win at the Allianz Arena thanks to a brace from Sadio Mane and a towering header from Van Dijk himself. 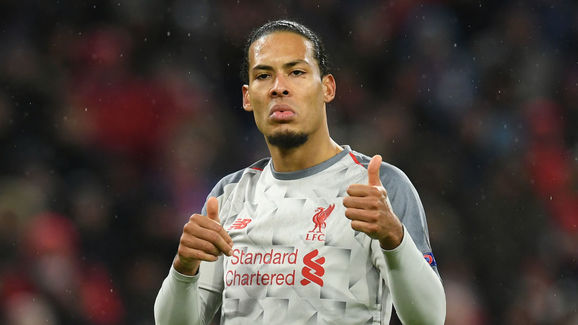 Moments after Liverpool's qualification was confirmed, Henry tweeted a graphic joking about van Dijk's dominance on the field.

Van Dijk's goal made it 2-1 on the night and gave ​Munich a huge mountain to climb, needing to score twice in the final 20 minutes to progress from the last 16, but it seems that the Dutchman's defensive display caught the eye of the Reds' owner.

​​In January 2018, Liverpool brought Van Dijk from ​Southampton to Merseyside for a fee from £75m - a world record deal for a defender. However, the 27-year-old has proved to be a priceless purchase for Jurgen Klopp's side, as they continue to challenge for domestic and European titles in the final months of the season.

Wednesday night's header was van Dijk's fourth goal of the season and his inch-perfect pass to Mane for ​Liverpool's opener set his team on their way to a famous victory in Munich, reaching the quarter final stage for the second successive season.

Van Dijk and Henry will now await Friday's draw to learn who they will be facing in the next stage of the Champions League, with three potential English opponents in ​Tottenham Hotspur, ​Manchester City and ​Manchester United.

Next up for Liverpool is a trip to ​Fulham in the Premier League on Sunday as they look to overtake City at the top of the table, who are out of action this weekend.