​UEFA have announced the shortlists of nominees for the 2018/19 Champions League positional awards, as Liverpool dominate with five players among the overall 12.

The shortlist consists of three players from four categories - goalkeepers, defenders, midfielders and forwards - voted on by an expert panel of the 32 managers of teams who competed in the group stages, and 55 journalists - one from each UEFA member state.

There are a few surprises in the final shortlist, but none of them are among the goalkeepers, as the stoppers from both finalists - the outstanding ​Alisson Becker and Hugo Lloris - join Barcelona's Marc-Andre ter Stegen in earning nominations. 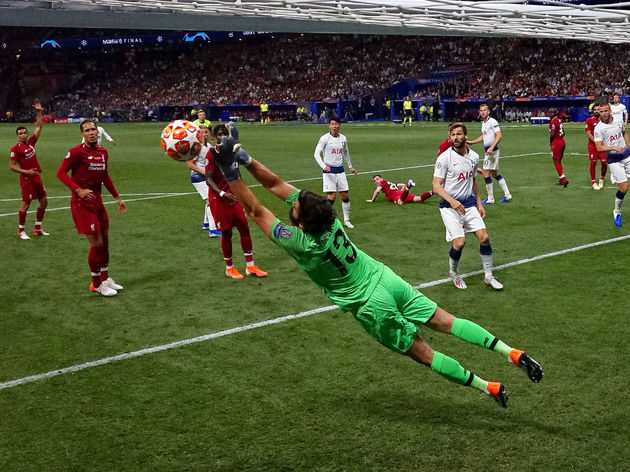 ​Liverpool won the competition for a sixth time, with their steady defence seeing them through the final with a clean sheet, and that's reflected in their defensive nominations as the colossal Virgil van Dijk and Trent Alexander-Arnold, the latter registering four assists on the road to Madrid, make the grade.

No points for guessing who the other defender is, as Matthijs de Ligt, who starred for beaten semi-finalists Ajax before moving to ​Juventus, joins the Liverpool duo. Further up the pitch, some eyebrows may be raised at the inclusion of Liverpool captain Jordan Henderson, but his leadership and tenacity in the engine room did enough to convince opposing managers and esteemed onlookers alike that he played a key role in the run to glory. Joining him are ​Tottenham's Christian Eriksen and another Ajax alumnus in Frenkie de Jong.

Leading the line, both Cristiano Ronaldo and Lionel Messi have had more memorable Champions League campaigns, but the latter still claimed the Golden Boot with a remarkable 12 goal haul, while Ronaldo - so often Mr ​Champions League - managed six. They both make the attacking shortlist, which concludes with Sadio Mane, who shone despite a more modest four-goal haul in the Reds' remarkable journey.

The winners will be announced a the draw for the 2019/20 group stage, which takes place in Monaco on Thursday 29 August.