​You can tell James Milner has been a father for some years now - because he has mastered the art of the 'dad joke'.

The whole of the United Kingdom has been sentenced to staying indoors for the next three weeks - at least - and frankly, we're all bored out of our minds already. And that includes footballers too, it seems. 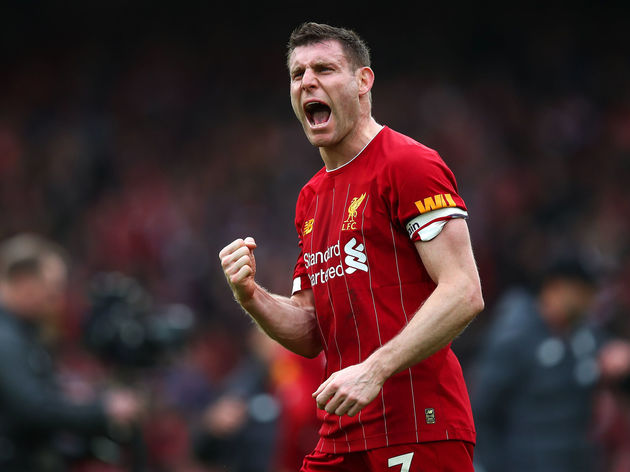 But some of us have been spending our time wisely, catching up on work that's due, or using these precious days to get a good exercise routine mapped out. And then, there are the James Milner's of the world.

The Liverpool star decided to bring a bit of cheer to the timelines of his ​Twitter followers, by creating an 'Isolation XI', pulling out some of the best (and worst) puns in the business. If you're not a fan of dad jokes, it's best to look away now.

Milner panned his camera through his starting XI, listing off each player one by one, who were all represented by an object he had found in his house.

Goalkeeper Joe Hart appeared in the form of the classic 'Loveheart' sweet, while Patrick Berger appeared on the wing in the shape of a... yeah, you've got it - a burger.

A special mention should go to his extended pun on Frank Lamp-ard, who may have got his 'wires crossed' with Gini Wijnaldum in the midfield. Check it out below and see what you make of it.

Had plenty of time to think about this... here’s my #isolationXI - let me know who would make your squad... #dadjokeseverywhere pic.twitter.com/zIQ3TedkrH

It's amazing how easily entertained you become when normal human contact is no longer an option.

The icing on the cake arrived at the end of the video, when having eaten substitute Lewis Dunk (a biscuit, obviously) ​Milner introduces manager Fabio Capello. I don't need to explain that one, I don't think.

Credit to the ​Liverpool star for going to the effort of creating such a star-studded XI, and for giving the rest of the world something to chuckle at during these trying times.
​
Expect follow-up XIs from the rest of the footballing universe...