Liverpool: The XI That Should Start Against Arsenal

In case you missed it, Liverpool were rather good last season. So good in fact that they barely added to their glittering squad over the summer with their star players already demonstrating once against this season whey they're a side to be feared.​

An opening day hammering on newly-promoted Norwich got the ball rolling, while their UEFA Super Cup exploits in Turkey evoked fears of tiredness and fatigue ahead of their subsequent top-flight clash with Southampton.

They rode their luck at times, but ultimately prevailed, leaving a home tie with recent whipping boys ​Arsenal next in their sights ahead of Premier League success. A visit of the north London side has made for light work over the past few seasons, with an aggregate score of 12-2 in the ​Reds' favour coming from their last three league games at Anfield.

Have a great week, Reds 

Next up for us, @Arsenal at Anfield on Saturday  pic.twitter.com/xX0xj6gUrw

As Jurgen Klopp's side get ready to host a new-look Gunners team, here's how they could lineup for Saturday's late kick off. Adrian (GK) - On paper, the only chink in Liverpool's armour remains between the sticks. Adrian was brought in to cover for number one Alisson Becker, however, the Brazilian's injury has thrust the Spaniard into action sooner than expected. He was solid in the UEFA Super Cup victory over ​Chelsea, but a howler against Southampton has seen doubts creeping in.

Trent Alexander-Arnold (RB) - An immense crosser of the ball, Alexander-Arnold wreaked havoc upon the Arsenal backline last time the Londoners visited Anfield. He will be hoping for similar freedom down the right flank on Saturday, as they look to maintain their 100% ​Premier League record.

Joel Matip (CB) - One half of an immense centre half partnership, Matip often goes uncredited for his work in the Liverpool team alongside Ballon d'Or nominee Van Dijk. The towering Cameroonian will pose a threat in both boxes on Saturday, in his second league outing of the season.

Virgil van Dijk (CB) - Many fans' pick for the Ballon d'Or, Van Dijk will be eager to demonstrate once again why he is up for the gong on Saturday against Unai Emery's side. The Dutchman scored on his last league game at Anfield, and will be hoping for his second of the season as they face the side directly below them in the table.

Andrew Robertson (LB) - The Scottish full-back registered 12 assist in the top-flight last season, only one behind his fellow teammate Alexander-Arnold, and he's already lagging behind the Englishman this season having failed to get off the mark. If Arsenal's defending is anything like their last visit to Anfield, he should get plenty of chances to bag an assist or two. 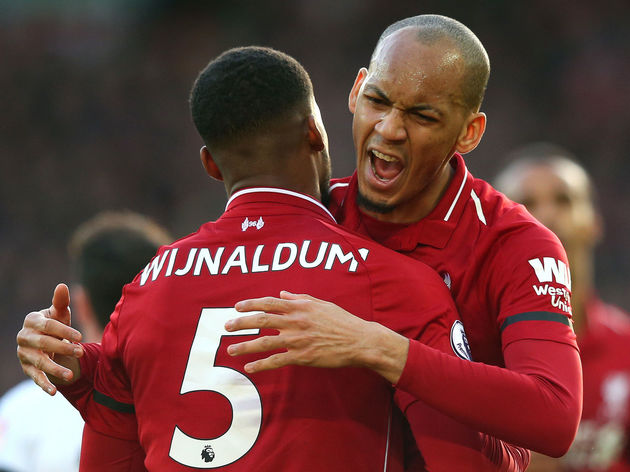 Fabinho (CM) - Not included in the starting XI against ​Southampton, Fabinho should return to the side for Saturday's game, with the Brazilian's job of stifling the Gunners' counter attack to be crucial as they bid for another three points.

Georginio Wijnaldum (CM) - The Dutchman started both of the Reds' league fixtures this season, with that unlikely to change as Klopp favours the 28-year-old in a midfield three for his versatility and work rate.

Alex Oxlade-Chamberlain (CM) - It could be two matches in a row where ​Oxlade-Chamberlain faces a former side, having started at St. Mary's last weekend. Should he get the nod against Arsenal on Saturday, then he will be able to show the Gunners what he's capable of in the midfield role that desperately wanted to play, but eluded him during his time at the Emirates. Mohamed Salah (RW) - Part of a forward three that picks itself, ​Salah will be hoping to rediscover his scoring touch once more against Arsenal, and add to his solitary goal so far this campaign.

Roberto Firmino (ST) - The Brazilian will have fond memories of this fixture last December, as he scooped the match ball with an inspired hat-trick during the 5-1 demolition. In total, ​Firmino

Sadio Mane (LW) - Since the turn of the year, no player has scored more goals for Liverpool than ​Mane. The Senegalese forward returned from his short break after Africa Cup of Nations duty as if he never left, netting three goals in three matches in all competitions already.