Liverpool Transfers: 6 Centre-Backs the Reds Could Realistically Target This Summer

While Liverpool had conceded just 21 goals in 29 Premier League games prior to the enforced hiatus,

As Virgil van Dijk and Joe Gomez are established as the club's definitive first-choice pairing, Liverpool will be on the lookout for a younger option to provide capable squad depth with room to develop, rather than an immediate starter.

Here's a look at six young centre backs ​Liverpool could and should (realistically) target in keeping with their transfer strategy and needs... Few English players have seen their reputation enhanced as greatly as White in the last calendar year.

12 months ago, he was a virtual unknown, out on loan at Peterborough in League One. Fast forward to today and he is one of England's hottest young centre-backs, set for the Premier League (one way or another), who has been watched by Gareth Southgate and compared to Rio Ferdinand and John Stones.

While it's easy to get caught up in the hyperbole, 22-year-old White does seem like an excellent young prospect, who has established himself as one of the Championship's finest ball-playing defenders under Marcelo Bielsa at Leeds this season.

His parent club Brighton are set to recall him when the campaign finishes, while a big move seems inevitable. ​Liverpool, meanwhile, have been linked and White would fit the bill as an up-and-coming star who can learn alongside Van Dijk, Gomez and Joel Matip.

His technical ability and penchant for driving forward runs from the back make him an easy fan choice. Another young English defender who has caught the eye this season is Tottenham's Tanganga, whose inclusion from the start in the 1-0 defeat to Liverpool back in January had fans (of both sides) frantically googling to find out who he was.

The 21-year-old looked surprisingly assured that day and has gone on to featured in five more Premier League games under José Mourinho, as well as making his Champions League debut.

Capable of playing anywhere across the back line, but seemingly most comfortable at centre-back, the England youth international has impressed in his brief showings this season and looks capable both physically and technically for the rigours of the Premier League.

Mourinho claimed he 'believes' in Tanganga's quality but the defender has but a few left months to run on his current contract.

If Liverpool could sneak in to land him on a 'free' deal, it might prove very shrewd business. A more 'out there' pick from the Premier League could be Sheffield United's Liverpool-born star Jack O'Connell, who has shone in his debut season in England's top flight.

With the Blades since their League One days, O'Connell has become a pillar of Chris Wilder's water-tight defence that has not only been stingy but also tactically innovative - featuring the famous overlapping centre-backs.

Sheffield United would surely ask for far more than their current record sale (David Brooks to Bournemouth for £11.5m), while O'Connell's contract doesn't expire until 2023.

The 26-year-old is not particularly quick but he is a surprisingly strong long-range passer, good in the air and versatile enough to play at left-back.

He is also a boyhood Liverpool fan. 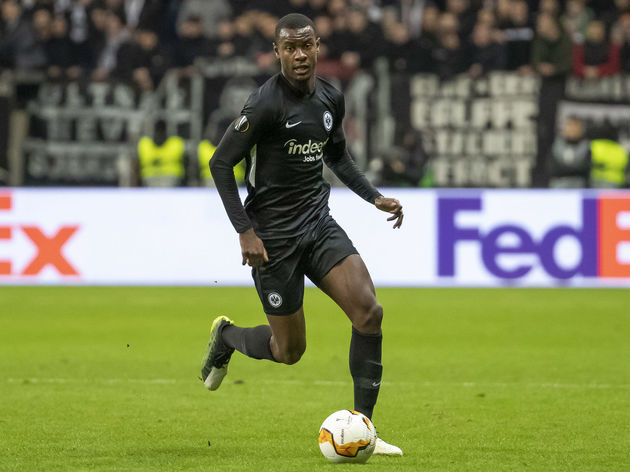 Heading over to the Bundesliga,​Liverpool have been linked with Frankfurt rising star N'Dicka.

The Paris-born 20-year-old has impressed in Adi Hutter's struggling side but has been shunted out to left-back for much of the season to cover for injuries, while he has featured in defensive midfield for the French youth teams.

At 6'4, positionally versatile, composed on the ball and having experience of Europe's top competitions under his belt already, N'Dicka ticks just about every box you could want when scouting a young defender.

With a contract that runs until 2023, he won't come cheap - especially with the likes of Arsenal and both Milan clubs linked. However, his signing could be a bargain long-term while it may also save on the need to spend on a left-back as well. Yet to make a senior appearance for ​Bayern Munich, Richards is still one of the club's hottest prospects and has been attracting attention from across the continent.

Born in Birmingham (the Alabama one), Richards - who turned 20 last month - is the latest North American star in Bayern's ranks, joining the club from Dallas in 2018.

Often training with the first-team, he has been a regular for Munich II in Germany's third tier and is presumed to eventually move up to be a part of the senior squad in the same way that Canadian Alphonso Davies progressed.

Arsenal, Chelsea and Barcelona have all been rumoured to be taking an interest in the centre-back, who cites Jerôme Boateng as his idol.

With Boateng and Javi Martinez leaving this summer, whether Bayern would allow a young gem like Richards to leave remains to be seen...but it's worth a shot. And finally, over in Italy, Hellas Verona's starlet Kumbulla has stood out as one of Serie A's best young defenders.

The 20-year-old, who was born in Italy but made his international debut for Albania last year, has made 18 league appearances for boyhood club Verona, whose stern defence had them in the running for European football prior to the enforced hiatus.

An imposing, aggressive centre-back who is as strong on the ground as he is in the air, Kumbulla has seemingly been scouted by every big European club going in recent months, with