Manchester United midfielder Paul Pogba is a doubt for his club’s huge clash with Liverpool later this month after French national team coach Didier Deschamps claimed the troublesome ongoing ankle injury is set to sideline the player for another three weeks.

Pogba suffered the problem during United’s August clash with Southampton and subsequently missed three games in all competitions. He made his return against Rochdale in the Carabao Cup, only to take another knock in that contest. 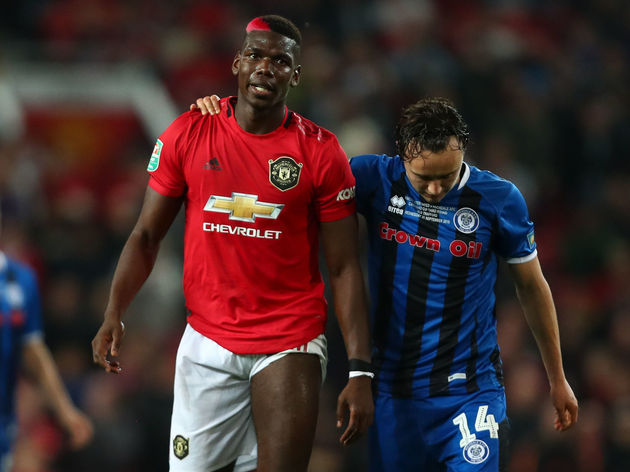 Pogba’s inclusion against Arsenal came as a something of a surprise and he looked to be struggling against the Gunners. United ​later confirmed that he would miss the Europa League trip the Netherlands to face AZ Alkmaar after being advised to rest.

Pogba was already all but certain to miss this weekend’s Premier League clash with Newcastle, but Deschamps, whose concern is France’s upcoming Euro 2020 qualifiers against Iceland and Turkey, has also cast doubt on the visit of Liverpool to Old Trafford after the international break.

“It’s a new worry with his ankle,” Deschamps is quoted as saying by Goal.

“He played in the [Carabao] Cup, he played again on Monday against Arsenal. He again has a problem that’s going to keep him out of action for three weeks. I’d prefer he was there like all the available players [for France], but unfortunately he isn’t in a physical state to be present.” Speaking after the AZ game, United manager Ole Gunnar Solskjaer was more hopeful that Pogba might be ready to face Liverpool in 16 days’ time, commenting that the international break will provide an opportunity for rest and recovery.

“Let’s see on Saturday morning, [but] probably not,” the ​United boss said in relation to this weekend’s must-win trip to Newcastle. “There’s an international break as well and it might be a time for us to give him 10-14 days extra to be ready for Liverpool.”

Jesse Lingard also joined United’s mounting injury list on Thursday night when he lasted only a few minutes after coming off the bench, before limping off with a suspected hamstring problem.