​Liverpool make the short trip to Old Trafford on Sunday, knowing victory over Manchester United will see them match the Premier League record for consecutive wins.

James Milner's last-gasp penalty saw the Reds hit 17 straight triumphs in the competition as they overcame Leicester City 2-1 at Anfield. That result, combined with Manchester City's surprise loss at home to Wolverhampton Wanderers, ensured Jurgen Klopp's side finished round eight with an eight point lead over the Sky Blues. The ​Red Devils, meanwhile, reached arguably their lowest ebb in the post-Sir Alex Ferguson era as they suffered a 1-0 defeat at ​Newcastle United, having already posted their worst start to a league campaign since 1989 after a dire 1-1 draw against ​Arsenal in matchweek seven.

Here's our preview of the ​English footballing classic.

Ole Gunnar Solskjaer could be without as many as 11 of his first-team squad, though several of his men are pushing to be fit for the ​Liverpool encounter.

David de Gea is likely to miss the game after suffering a hamstring injury while on Spain duty, and Diogo Dalot, Jesse Lingard, Timothy Fosu-Mensah and Eric Bailly are also set to sit out. However, Phil Jones, and Mason Greenwood have an outside chance of making the clash.

Fortunately for Solskjaer, £50m summer signing Aaron Wan-Bissaka is close to a return following a bout of tonsillitis, while Solskjaer has remained hopeful that Paul Pogba will be available. 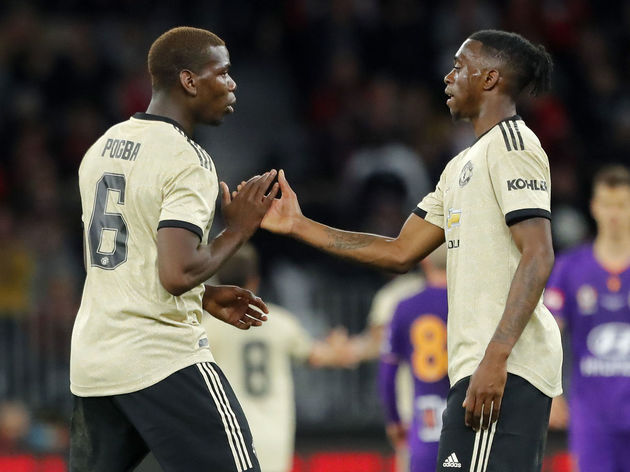 Klopp has far less personnel currently receiving treatment. Though Nathaniel Clyne is still months away from completing his rehab on ruptured knee ligaments and Mohamed Salah will face a late fitness test due to an ankle problem, a few absentees are in line for a recall.

The Reds expect Joel Matip and Xherdan Shaqiri to be available after both had brief spells on the sidelines, whilst Alisson resumed training last week and should make his first appearance since the opening night of the ​Premier League season.

United have the edge over Liverpool in terms of league titles, having collected two more than their north-west rivals. Additionally, the Red Devils sit 12 victories clear of Klopp's recruits in the overall record, winning 88 of their meetings, compared to the Merseysiders' 76.

In February, the teams played out the 66th draw in the history of this fixture as De Gea kept Liverpool's stellar frontline at bay in an Old Trafford stalemate. The point saw Klopp and his boys return to the Premier League summit with 11 fixtures left to play, yet the German was decidedly underwhelmed with the result, given the injury crisis that plagued United at that point in time.

Though it's impossible to say whether the Reds would have gone on to collect the title if they'd won at the Theatre of Dreams, failure to put away their depleted opponents was a reasonable blow for Liverpool as they battled for supremacy with ​Manchester City.

United have been triumphant in only seven of the 23 matches they have played since holding Liverpool in the early months of 2019. Even more concerning are their recent displays, the club's only win in their last five fixtures coming via a penalty-shootout at home to third-tier Rochdale.

There has only been one game in which the Red Devils have scored more than a single goal this term, the 4-0 trouncing of ​Chelsea in their season curtain-raiser. The players look lost on the field, struggling to control contests as darkness continues to reign over Old Trafford.

"This is probably the most difficult time since I've been here. I don't know what is happening."@ManUtd goalkeeper David De Gea struggles to hide his deep disappointment after the Reds' 1-0 defeat to Newcastle 

Things couldn't be more different at Anfield. Klopp has overseen a stunning run of results that began in the closing stages of 2018/19, his team's devastating form this year seeing them streak away from City.

Sadio Mane and Joel Matip have reached new levels this campaign, despite performing well throughout the previous season. They have both been integral to Liverpool's success, yet that could be said of numerous players in this marvellous, determined Reds squad.

Here's a look at the sides' last five results:

In theory, Liverpool should secure a comfortable victory in their enemies' own back garden. Of course, it's never going to be that straightforward, regardless of United's plight under Solskjaer.

Expect the Red Devils to go into the clash with added motivation. They're likely to sit back and soak up pressure for large periods of the encounter, working hard to harass Reds personnel and deny them space. However, their is a gulf in class between the clubs, with momentum also firmly behind the visitors. Eventually, they should find a breakthrough, but it may not be comfortable viewing for their supporters.