​Liverpool forwards Mohamed Salah and Sadio Mane aimed a playful dig at teammate Andy Robertson after the full-back scored in the Reds' 4-3 win over Salzburg in the Champions League on Wednesday.

The Scotsman gave Liverpool a 2-0 lead in the first-half, diverting a Trent Alexander-Arnold cross in at the near post after following his own driving run with the ball by surging into the opposition penalty area. This was only Robertson's second goal for the club, having previously struck on the final day of the 2017/18 season in a 4-0 win over ​Brighton.

In their post-game interview with ​BT Sport, Salah and Mane - who were both also on the scoresheet in the thrilling encounter - were asked about Robertson's finish, which was taken with the aplomb of a seasoned striker. 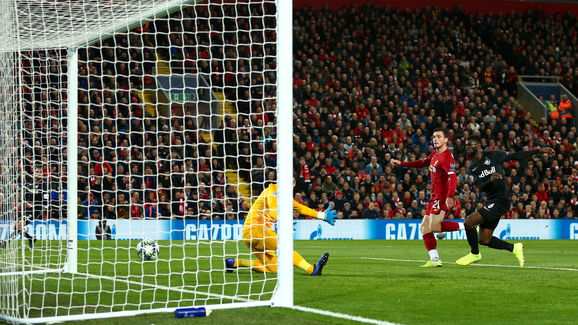 With a more serious answer, Salah emphasised how delighted they were for the former ​Hull City man, who works tremendously hard for the team.

Assessing the game, where Salzburg recovered from a three goal deficit before Salah sealed the victory for ​Liverpool, the 27-year-old acknowledged: "After they scored the three goals, in the second half, it becomes difficult. "But we play to win the game. We focus on each game, and we won so we're happy with it. They made it very tough for us, but we were happy to score the fourth goal and we get the three points which is the most important thing."