​Guinea national team manager Paul Put has insisted that Naby Keita must be 'mentally good' before returning to the field, with the Liverpool star's house was the subject of an attack as a group of youths blamed 'witchcraft' for the midfielder's fitness and form problems.

24-year-old Keita had a mixed first season at Liverpool following a £52m move from RB Leipzig. The much-anticipated midfielder struggled for form in the first half of the season and then picked up a campaign-ending groin injury which ruled him out of the Champions League final. While he was deemed fit enough to travel to Egypt with Guinea for the Africa Cup of Nations, he missed the opener and played only 70 minutes of his country's 1-0 defeat to Nigeria before returning to Melwood for assessment.

There are fears that ​new thigh and shin knocks could rule him out of the rest of the tournament, disrupting his preparation for the upcoming club season, and his manager is hopeful he will be ready for Sunday's round of 16 clash against Algeria.

“I hope he will be back to join the team. He was called by the medical staff of Liverpool, so he left,” Put explained, via the BBC.

“So I hope this decision will be positive, that he will be back."

Put cited mental reasons as cause for concern over Keita's ability to be ready, with the knocks on international duty just the latest in a potentially taxing string of injuries. Put said: “We have to know if the player is mentally good in the head, because if you’re not good then you’re afraid to get injured. That makes no player comfortable.

“So I will see now the reaction of the Liverpool side, and I will see the feeling of Naby himself.

“He also been forcing himself very hard, but the injury is still in the head and if you feel something you can’t give yourself 100%.

“That doesn’t make sense to play, certainly not with high-intensity games. So now I think we have to wait and see the result.” BBC: "We sent a team of policemen to a house at Coleah in Conakry to restore calm after some youths attempted acts of riotous conduct in a house believed to be the family home of footballer Naby Keita."

The report claims that "the youths were venting frustration at one of Keita's relatives who they believed had performed witchcraft, affecting the Liverpool star's Nations Cup performances and increasing his recent spate of injuries." 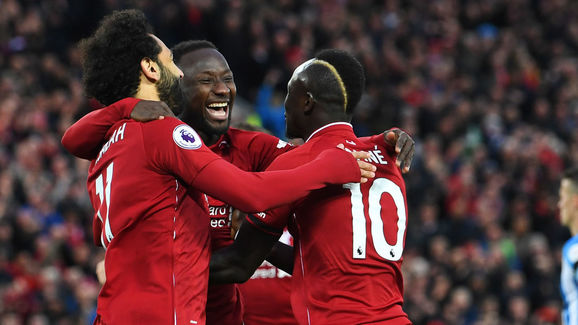 Should Keita recover and Guinea progress past Algeria, it's possible he will face Liverpool teammate Mohamed Salah (Egypt) in the tournament semi-finals, and Sadio Mane (Senegal) in the final.