​Manchester City manager Pep Guardiola has, unsurprisingly, played down the significance of next week's Premier League clash against Liverpool, claiming that failure to win would not be decisive in the title race.

After Liverpool came second to City on 97 points last year, both sides are fully aware of how important it is to take maximum points from almost every game. 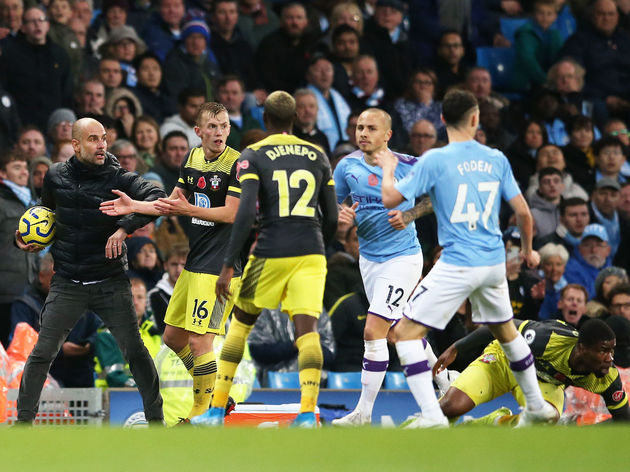 But speaking after his side's 2-1 victory over Southampton, quoted by the ​Metro, Guardiola claimed that even if his side fail to win at Liverpool, they won't be out of the title race.

"We’re going to try, but I don’t think so. How many centuries have they not lost at Anfield?" the former ​Barcelona and ​Bayern Munich coach said.

"We will see. Now we go to Italy to play Atalanta and, when we come back, we go to

Liverpool have not lost at home in the Premier League since April 2017, meaning they are two seasons unbeaten at Anfield.

It makes the Reds slight favourites with bookmakers ahead of the colossal battle between arguably the two best teams in Europe, after Jurgen Klopp's side came back to record a dramatic 2-1 victory over ​Aston Villa to keep their lead at six points.

Before the game though, both teams face important Champions League fixtures in midweek. ​Liverpool probably have the easier game ​at home to Belgian champions Genk on Tuesday, whilst ​Manchester City travel to Italy to play Serie A challengers Atalanta.

However, despite the crunch game on Sunday, Guardiola dismissed the possibility that he could rest players to keep his most important stars fresh.

"We’re going to play with the best team possible to win at Atalanta and after that we go to Anfield," Guardiola added:

"The best way to face Atalanta is the way we played today, and the best way to go to Anfield is to play a good game against Atalanta, who have been fighting with the top clubs in Italy for the last two or three seasons. "They can score four, five, six goals every game, so we’re going to play with what we believe is the best team and try to qualify for the next stage of the Champions League."