​There ain't no rest for the wicked as they say, and that certainly rings true for Jurgen Klopp's Liverpool.

Straight off the back of a helter skelter Champions League victory over Red Bull Salzburg, they prepare to take on high-flying Leicester City in Premier League action at Anfield.

It's the final leg of a gruelling journey the Reds have come through intact, if a little bruised, and they'll be keen to sign off for the international break with a 16th straight Premier League win. To do it, though, the German mastermind might have to delve into the depths of his squad after a physically testing few weeks.

Here is how we think Klopp will set his side up to keep up their 100% start to the season. Adrian (GK) - The Spaniard will find his game-time limited when Alisson makes his return after the international break, but he's proved a capable deputy and will be keen to potentially finish off his run in the team with a strong performance here.

Trent Alexander-Arnold (RB) - The 20-year-old has played a lot of football this season but his performances have made him an immovable object. With relatively little creativity coming from the midfield three, his threat down the right will be central to his side's chances of keeping their remarkable run going.

Joe Gomez (CB) - Has had to wait for his chance in the team but Joel Matip's injury has given him it and he won't be keen to surrender it. Showed signs of his old self during the week despite a mad 20 minutes where the defence fell apart and will be keen to show here why he's the long-term partner to the next man on this list. No points for guessing who that is. Virgil van Dijk (CB) - After a start to the season that has been shaky by his own meteoric standards, he looks to have gone from being supernaturally good to plain old incredible. Will be keen to right that wrong here with a second league clean sheet on the bounce.

Andy Robertson (LB) - If we're nitpicking to find a fault in his game, then Robertson's is probably that he doesn't score enough for a full-back who marauds as much as he does. He hit the net during the week though and now he has a taste for blood, he will be thirsty for more. 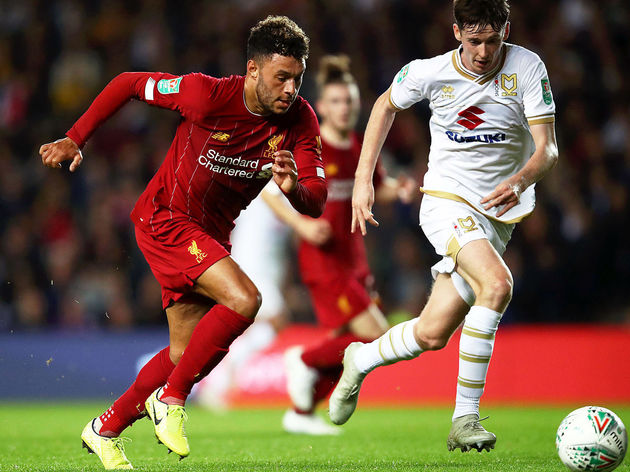 Fabinho (DM) - This time last year the Brazilian was just starting to get a foothold after a concerning start to life at Anfield, but 12 months later the place is his and going absolutely nowhere. Arguably the best defensive midfielder in the world.

Alex Oxlade-Chamberlain (CM) - It's a cut-throat battle for places in the Liverpool midfield, and despite a promising return to the team in the early part of the season, Ox has found himself displaced by captain Jordan Henderson over the last few games. It seems reasonable Klopp may want to give the number 14 a rest after a couple of heavy shifts, however, and with Naby Keita not quite there yet, he's the obvious choice to come back in.

Georginio Wijnaldum (CM) - The tireless Dutchman is the perfect Jurgen Klopp midfielder; physical, energetic, composed in possession and prepared to work tirelessly in both boxes and all the bits between. Few imagined him morphing into the player he is when he arrived from Newcastle a few years ago, but such is the transformative story of this Liverpool side. Mohamed Salah (RW) - The 'one-season wonder' criticisms levelled at him until midway through his second term have put on a new mask. He may be 'selfish' but remains Liverpool's most feared attacking threat, whether he's setting up his teammates or scoring himself.

Roberto Firmino (CF) - Klopp tried to play without Firmino against ​Newcastle, an experiment that lasted all of half an hour until the Brazilian emerged from the bench and showed him what he was missing with a pair of assists. He's the gravitational force of the team both in and out of possession

Sadio Mane (LW) - His pace and dynamism drives Liverpool forward and his clinical touch has been the difference for his side countless times in his four seasons at Anfield. Playing up against an attacking full-back in Ricardo Pereira, he may find himself getting a lot of joy in behind.