Liverpool's 2-1 victory over Genk on Tuesday extended their​ unbeaten record at Anfield in the Champions League to an incredible 24 games.

You have to go way back to 2014 for the last time that the Reds came unstuck on home soil in the competition, when they fell to an emphatic 3-0 defeat against Real Madrid during the 2014/15 season.

That campaign was the Reds' first back in Europe's premier club competition since 2009 and the result was a major reality check for Brendan Rodgers' side - who were still reeling from the infamous near-miss in the Premier League and departure of Luis Suarez that summer.

22 - Liverpool haven’t lost at Anfield in European competition since October 2014 vs Real Madrid (0-3 in the Champions League) – since then, they’ve won 16 and drawn six of their 22 such games. Fortress. pic.twitter.com/IpM6GfvhNs

Despite Suarez's departure, there were still some high-profile names in the Liverpool lineup that day...as well as some not so high-profile ones.

So, let's reminisce together about a time when Reds were far from European champions and were humiliated by Los Blancos in their own backyard. Despite this, Mignolet - who was signed from Sunderland in 2013 - continued as the Reds starting keeper for a number of seasons after this, only being displaced by Lorius Karius midway through the 2017/2018 campaign.

He left Anfield this summer for Club Brugge and has played every single one of his side's games so far. Good for him. Giving the unenviable task of shacking ​Cristiano Ronaldo, Johnson had a tough day at the office.

Question marks over his defending refused to subside and eventually Johnson was sold to Stoke City in 2015. He spent two disappointing seasons in the Potteries before retiring at the end of the 2017/18 campaign. ​Lovren was caught out by a superb ​James Rodriguez pass for Cristiano Ronaldo's opener and generally had a disappointing night.

Despite this, the centre back carved out an impressive Liverpool career and even started the 2018 Champions League final against ​Real.

These days, the man who once said he was ​'unlucky' not be considered better than Sergio Ramos (give me strength), has fallen down the Reds' pecking order, only making three Premier League appearances this season. ​A bit of a cult hero at Anfield, Skrtel partnered Lovren at the heart of the Reds' defence against Real and indeed for much of that season.

The Slovakian would spend one more year at the club, before moving to Fenerbahce in 2016.

He recently moved to Turkish rivals Istanbul Basaksehir FK and has already scored two goals in only seven appearances. Not too shabby for a tough-tackling defender. Lining up at left back for the Reds against Real was Alberto Moreno - who performed in typically hapless fashion.

​Long a subject of derision at Anfield for his perceived lack of defensive awareness, the Spaniard finally departed the club this summer much to some Liverpool fans delight.

Moreno is now plying his trade in ​La Liga with Villarreal but has had a fairly limited impact due to injury, only making three appearances so far. 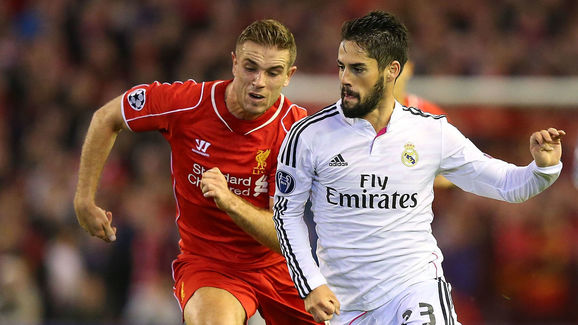 The game was one of the biggest of the Englishman's career to date but it would turn out to be an evening to forget for the-then 24-year-old.

Already a Champions League winner, Henderson has now made an astonishing 338 appearances for the Reds in all competitions and could lift the Premier League title in May if his side can keep up their impressive start to the season. Liverpool legend Steven Gerrard was the deepest-lying of the three midfielders deployed by Brendan Rodgers against Real.

In the end, the 2014/15 campaign would be his last for the Reds, with the long-serving club captain joining LA Galaxy at the end of the season.

After two years in MLS, he moved into coaching, first taking charge of Liverpool's under-18s before accepting the Rangers manager's job in 2018. ​Completing Liverpool's midfield was Joe Allen, who joined the club from Swansea in 2012 - where he had previously worked under Brendan Rodgers.

Affectionately known as the 'Welsh Pirlo', Allen made 132 appearances in four years while at Anfield, with his hair growing increasingly lustrous with each passing season.

The midfielder departed for Stoke City in 2016 and is still playing for the Potters who are currently attempting to battle their way out of the Championship relegation places. ​Bombing down the right wing for Brendan Rodgers' side was a 19-year-old ​Raheem Sterling.

Sporting an eye-catching mohawk and wearing the number 37 jersey, Sterling was the Reds' principle attacking threat despite his tender age.

With Mario Balotelli, Daniel Sturridge and Rickie Lambert failing to fill the Suarez void, Sterling was often played as a striker, scoring 11 goals in 52 games in 2014/15.

Eight months on from the Real Madrid defeat, he would break Liverpool fans' hearts by departing for a ​Manchester City, in what was a then record-breaking fee for an English player. ​Speaking of breaking Liverpool fans' hearts, lining up on the left-hand side of Rodgers' front three was Philippe Coutinho.

The Brazilian had arrived at the club from Inter midway through the 2012/13 season and racked up just over 200 appearances during a four-and-a-half season stay at Anfield.

Eventually, the allure of ​Barcelona would prove too much and Coutinho would depart for Camp Nou in January 2018.

However, the attacking midfielder has struggled to establish himself in Catalonia and is currently out on loan at ​Bayern Munich. ​The ballad of Mario Balotelli was short and sweet.

£16m Balotelli was supposedly brought in to replace Suarez but failed miserably to live of the Uruguayan's incredible scoring record.

After scoring a hopeless four goals in 28 appearances, the striker was shipped out on loan to ​AC Milan, before resurrecting his career at OGC Nice in Ligue 1.