​Since arriving from Hoffenheim four years ago, Roberto Firmino has become one of Liverpool's key players.

The Reds signed the Brazilian for £29m in June 2015 with his debut coming against Swindon Town in a preseason friendly on 2 August.

Firmino has helped to take Liverpool to the next level and his contributions led to them challenging for the Premier League title and landing the Champions League this season - but what are some of his other memorable moments with the Reds? ​​Roberto Firmino's greatest achievement since he joined Liverpool has to be winning the ​Champions League this past season.

Firmino played a key role in the Reds landing number six and scored four goals in this years campaign. The Brazilian played the full ninety minutes against Tottenham Hotspur in the final, putting in an impressive shift.

His First Hat-trick for Liverpool Liverpool welcomed ​Arsenal to Anfield in December 2018, with Roberto ​Firmino stealing all the headlines.

The number nine scored his first hat-trick for ​Liverpool as the Reds crushed Unai Emery's Arsenal 5-1.

Firmino's first goal was a trademark 'no look' tap-in following a mistake from the Arsenal defence. His second goal came following an outstanding weaving run through the middle of the Gunners, leaving defenders helpless on the ground. The third came from a penalty that he put away with aplomb.

His third goal also put his name in the record books by becoming the highest scoring Brazilian in ​Premier League history.

Firmino winning all 3 points with this crucial last minute goal against PSG. Huge moment in terms of qualifying for the KO stage pic.twitter.com/iR5ix3RNYJ

Despite finding himself on the bench after suffering an eye injury against ​Spurs, R

The game was poised at 2-2 when the Brazilian hit the field and it didn't take long for Firmino to have an impact for Liverpool. Their number 9 blasted a low driven shot across the goal, scoring the winner in the 92nd minute - a vital goal as Liverpool managed to progress from the group ahead of Napoli on goals scored alone.

Knocking Manchester City Out of the Champions League 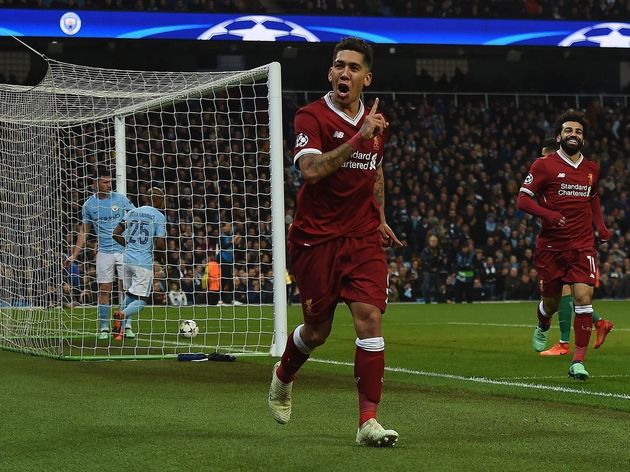 Last season, after a crazy first leg at Anfield against ​Manchester City in the quarter-finals of the Champions League, Liverpool took a 3-0 lead to the Etihad for the return fixture

Overcoming a raucous crowd, Firmino and his teammates cooly dispatched of the Citizens 2-1, with Firmino sealing the win to confirm Liverpool's passage to their first Champions League semi-final since the 2007/8 season.