Manchester City striker Sergio Aguero believes that the Premier League title race will be touch-and-go until the end of the season, and claims that 'three or four teams' could yet win the league.

The champions lost more Premier League matches in December than in the entirety of last season, slipping up against Chelsea, Crystal Palace and Leicester. 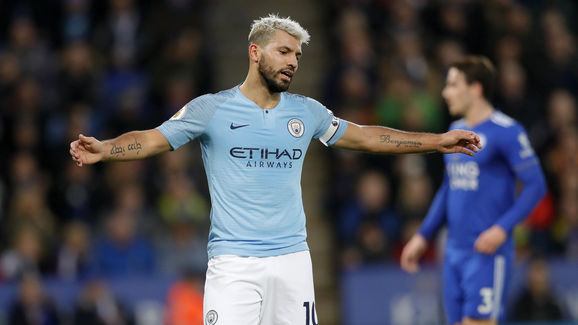 ​Liverpool had a perfect month, winning all seven of their Premier League fixtures, ​Aguero

"There's no denying it is a huge game for both clubs," Aguero told ​City's official website. "Direct clashes between leading teams have a major impact towards the end of the season.

"December didn't pan out the way we wanted it to and now we've got more ground to make up so yes, that makes the game even more important.

"But we are only in January and there are still plenty of Premier League games ahead of us and from the looks of it, there are three or four teams angling to win the title. It's going to come down to the wire.

"Of course, we knew repeating last year's success wouldn't be a simple task but we always aim for excellence."

Aguero is not ruling ​Tottenham out of the title race. Mauricio Pochettino's side temporarily climbed above ​City in the table before their surprise defeat to Wolves last weekend.