Liverpool’s vast defensive improvements in 2018 have largely been credited to Van Dijk’s presence in Jurgen Klopp’s rear-guard, but the centre back also made an important contribution at the other end of the pitch as he scored the Reds’ second at Molineux.

The win extended Liverpool’s unbeaten start to the Premier League season and ensured them top spot for Christmas. 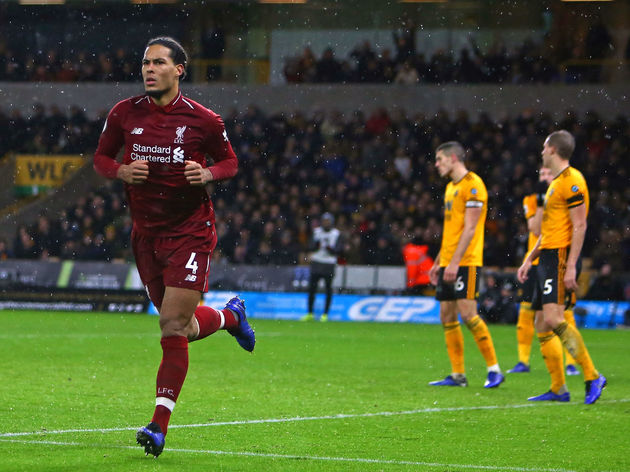 Cascarino, writing for the ​Times, suggested that Van Dijk could yet surpass some of the Premier League defensive greats with his ability to 'boss' games.

He wrote: “Some players make the game look easy and Virgil van Dijk is just bossing this league at the moment.

“He was winning headers, matching Adama Traore for pace, throwing dummies in the ​Wolves penalty area and he took his goal like a centre forward, drifting in off the shoulder of the defenders.

The Reds are top of the Premier League at Christmas #UCL pic.twitter.com/Il1uxYcMHH

“Liverpool haven’t had a defender as classy and composed since Alan Hansen. The Premier League has had some great central defenders – John Terry, Tony Adams, Rio Ferdinand – but van Dijk may turn out to be better than all of them, he’s one of the best centre backs I’ve ever seen.”

Van Dijk has become a leader among the Liverpool ranks and has inspired his side to great defensive improvements this term.

The Reds have conceded just seven goals in their 19 Premier League matches this term, keeping 11 clean sheets in the process.

The reinforcements have been crucial in matching the explosive attacking potential of Klopp’s famed attacking setup, with Mohamed Salah once again leading the domestic scoring charts this term.

Liverpool will look to continue their fine efficiency at both ends of the pitch to maintain their unbeaten league run as they host ​Newcastle at Anfield on Boxing Day.