​Virgil van Dijk claims he didn't join in the team celebrations for Liverpool's opening goal because he was waiting to see whether VAR ruled out the strike.

Liverpool beat Manchester City 3-1 to move further ahead of their title challengers, with the Reds taking the lead after just six minutes following a controversial opener from Fabinho.

Pep Guardiola and his City side believed they should have had a penalty after the ball struck Trent Alexander-Arnold's arm inside the box before Liverpool broke, however, Michael Oliver - and the VAR - didn't oblige and Liverpool scored at the other end within 21 seconds of the appeal. ​Fabinho's glorious shot gave ​Liverpool the early advantage and while the majority of Jurgen Klopp's team were in hysterics, Van Dijk remained calm due to the potential influence of VAR.

The Dutch international told ​Sky Sports after the match: "Every goal you know now you have to wait anyway, so I wasn't even celebrating I think.

"But in the end the VAR gives it so you have to just keep carrying on, you can't change it anymore."

Many people thought ​City's penalty claim merited a spot kick, and at a crucial point in the match, it was a decisive decision. 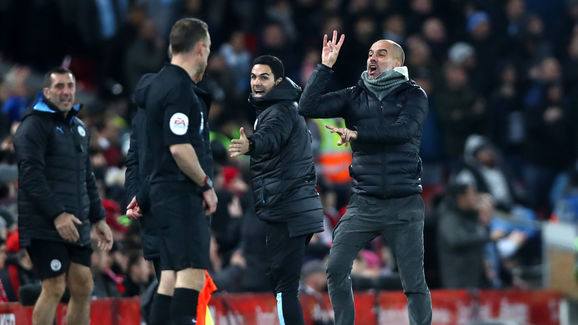 However, Virgil van Dijk seemed unsure of the claims: "I think I saw ​Bernardo Silva hitting it first [with his arm] and maybe ​Trent hit it as well.

"What can I say? I can say a lot of things, but if the VAR gives it then you have to accept it."

Pep Guardiola was incensed with the call and even took the time to sarcastically praise the officials come the final whistle.

However, Liverpool went on to score twice more through ​Mohamed Salah and ​Sadio Mané, holding out for a 3-1 victory which sends them nine points clear of Man City in fourth - a result that many feel has all but decided the title race already. However, Van Dijk took the opportunity to quash the idea that Liverpool have already won the league saying: "We all know and we all feel that there's so many games left, so many things can happen between now and mid-May.

"So the only thing we can do is hopefully stay fit, all of us, we need everyone, and play as well as we can".

He continued: "Obviously we're very happy with the position we're in right now, but we shouldn't take it for granted - and we won't. But we have to just keep going and take it game by game."

Both sides now head in to the international break before returning to domestic action on the Saturday 23 October, with City hosting Chelsea and Liverpool travelling to Crystal Palace.