Virgil van Dijk: The Best Chance for a Defender to Win the Ballon dOr Since Fabio Cannavaro

​72 appearances, 39 clean sheets, seven goals, four assists, and now one Champions League. There is very little left to say about Virgil van Dijk that hasn't already been said, but the numbers speak for themselves.

There is no question that he has played a near-ineffable role in Liverpool's transformation from top-heavy top-four contenders into the street-wise powerhouse that doesn't even need to play well to lift the biggest prize in European football.

There is also no question that, defensively, there is no more effective player on the planet at present. The Breda Behemoth has answered every question asked of him since his £75m move from Southampton in January 2018, to the point that after 18 months, only one remains: is he the best player in the world?

Van Dijk himself reckons not.

As far as he is concerned, it is Lionel Messi's to lose. Messi​he said after the Champions League final

Another MASSIVE performance from VVD. @VirgilvDijk has been voted @ChampionsLeague player of the week.  pic.twitter.com/aAhNmz6mi8

He would say that, though, wouldn't he? Regardless, it's some question, and one that can really only be answered in conclusive terms when the award is dished out in December. For ten straight seasons, it went to one of Messi or Cristiano Ronaldo, with Real Madrid's Luka Modric breaking the cycle in 2018.

Only once since the turn of the century has the award been given to a defender, with Fabio Cannavaro lifting it in 2006. You could make the case, then, that simply being a centre back, with less accessible statistics available to assess performances, works against the Dutch destroyer's chances of pipping Messi - generally considered the marginal favourite at present - this time around. 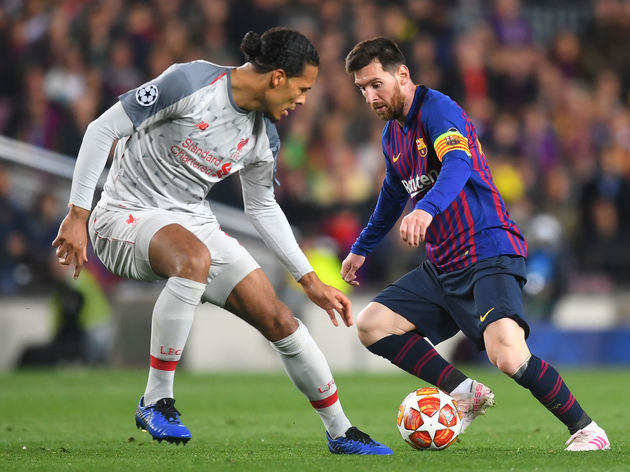 Interestingly, if we draw comparisons with the season which led to Cannavaro lifting football's most prestigious individual honour, then the odds are hardly stacked against Virg.

2005/06 saw the Italian endure a fairly average club season; Real Madrid finished second in La Liga, conceding 40 goals, while Cannavaro and co went out in the last 16 of the Champions League to eventual finalists Arsenal.

Van Dijk's Liverpool, while also only finishing second in the league conceded just 22 goals and were obviously far more impressive on the continent.

Cannavaro, of course, captained Italy to the World Cup in 2006, and that undoubtedly factored into the 173 votes that went in his favour, but he did finish the season with just the one trophy. Van Dijk, meanwhile, has the Champions League in the bag.

While he could yet claim as many as three (albeit not very illustrious) trophies that could boost his chances - with the Nations League, European Super Cup and Community Shield still up for grabs before a vote is cast - it's the Champions League crown that carries the most weight as far as Ballon d'Or is concerned.

In seven of the last ten seasons, the award has gone to a player who claimed European glory. In his characteristically rock-solid display against ​Tottenham - remarkably the 64th consecutive match in which no opposition player was able to dribble past him - Van Dijk did just that, and made a case for himself to add football's premier individual award to his collection.

No-one has completed a dribble past @VirgilvDijk in any of his last 64 appearances for us. 

There is plenty more to consider in comparing the two to assess Virgil's chances. Cannavaro did not have Messi's 51 goals in 50 games to contend with, winning the award ahead of Gianluigi Buffon and Thierry Henry - the latter netting 33 goals in 45 appearances for Arsenal.

Provided Van Dijk and ​Liverpool can carry their stellar defensive form into the early part of next season, however, and put the Reds on course for anything close to the 97 points they collected last season, then the Dutchman has a competitive chance of emulating Modric, and freezing out the Messi/Ronaldo duopoly for a second successive year. With Franz Beckenbauer in 1976 and Fabio Cannavaro 30 years later the only two centre-backs in history to win Ballon d'Or, it is not an easy thing for a defender to do. If anyone in the modern era has a chance, however, then this season has proved that it's Virgil van Dijk.