​Liverpool's return to their former glory has been a while coming but the Reds are finally back at the summit of European football with their Champions League crown.

After their heroics to beat Tottenham Hotspur and having accumulated 97 points in the Premier League (only bettered by champions Manchester City) it's been a wild ride for much of Jurgen Klopp's squad who could only dream of finding themselves in this position a few years ago.

It's taken seven years for another English team to be crowned European champions after Chelsea achieved the feat back in 2012. Here's what the current winners were up to when it last happened...

Having joined the academy of Brazilian side Internacional in 2002, the Reds shot-stopper ​hadn't even made his senior debut for the club, which came a year after Chelsea lifted the trophy.

He was still working up through the youth system on his way to making a move to Roma in 2016.

​Despite being much younger than Alisson, Alexander-Arnold joined a professional academy only a year later than his teammate. He's been at Liverpool for since the age of six and would have been both studying and training back in 2012 at just 13.

Virgil van Dijk and Andy Robertson once played each other in Scotland https://t.co/OYRHR7rIs4 pic.twitter.com/mLLItxzNzf

The Premier League's PFA Player of the Year hadn't even made his move to Celtic from Groningen when Chelsea won the Champions League in 2012.

The Dutch giant - who started his career at right back and worked part-time as a dishwasher - had just finished a difficult season in the Eredivisie, during which he went to hospital for kidney poisoning.

Since moving to Celtic and later Southampton he blossomed into a top defender and caught the eye of Liverpool's scouts.

One of few players in Liverpool's Champions League final lineup who were already well established as first-team professionals for big clubs in 2012, Matip was a regular with Schalke 04, winning both the DFB-Pokal as well as the DFL-Supercup the year before. He also made his Cameroon debut in 2010. He'd have to wait another four years before making his move to Liverpool.

Having been released by boyhood club Celtic, Liverpool's feisty left back was just starting his senior career with Queens Park in Scotland's third tier when Chelsea became champions.

He'd go on to play against Van Dijk during his time at Celtic before teaming up with the Dutchman in Merseyside. The former Sunderland star joined from Sunderland in 2011 and despite representing England at Euro 2012 the following year, he was far from an established member of Liverpool's starting lineup back then.

In August of 2012, Liverpool even attempted to offload the young Henderson to Fulham, but the player rejected the move and the rest is history.

2012 was a significant year for Fabinho, who secured himself a move to Eruope and Primeira Liga side Rio Ave from Fluminense. However, he spent the entirety of his time there out on loan.

His senior debut came against Villareal, during a year-long spell with ​Real Madrid's B-team, Castilla, a year later during the 2012/3 season.

Wijnaldum is a product of Feyenoord's youth system, but made a move to PSV Eindhoven for €5m in 2011, a year prior to Chelsea's Champions League glory. Although he infamously spent time at Chelsea in his younger days, Salah wasn't a Blues player when they won the Champions League having only been signed in 2014.

Like Fabinho, teenage Salah left for his big break in Europe in 2012 after impressing in Egypt for Al Mokawloon Al Arab.

He joined FC Basel in the summer where he won the title in his debut season, along with the SAFP Golden Player Award​. 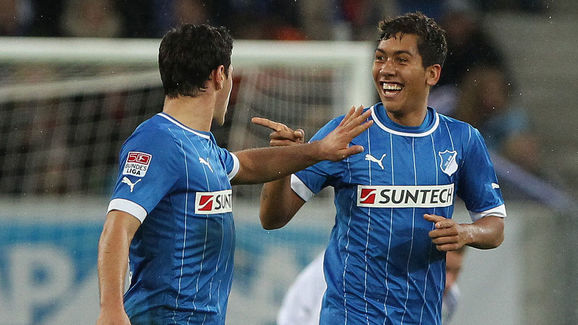 Firmino spent four-and-a-half seasons with Hoffenheim and was already an established attacking midfielder for the Bundesliga upstarts back in 2012, scoring seven goals that seasons.

It wasn't all smooth sailing for the young Firmino though, who was dropped over disciplinary issues the same year. The pacey winger started his career in France, making his professional debut with Metz in Ligue 2 in the 2011/12 campaign. Following relegation, Mane joined Austrian side Red Bull Salzburg -where he later met Naby Keita.

In 2012, he was also selected to play in the 2012 Olympics for Senegal and even took on Great Britain at Old Trafford in the group stages, before eventually going out in the quarters to Mexico.

He would later become teammates with Van Dijk at Southampton before the pair were reunited once again at ​Liverpool. James Milner (27) - The most successful of Liverpool's squad back in 2012, Milner had already made over 200 top-flight appearances and just won his first Premier League title with Manchester City in the most dramatic of fashion. Aguerroooooo!

Joe Gomez (15) - Still a schoolboy when Didier Drogba and co. won in Munich, Gomez actually made his Under-18s debut for Charlton Athletic aged just 13. His first senior outing was still two years away however.

Divock Origi (17) - After turning down an approach from Manchester United, the unlikely hero of Liverpool's season spent his youth in Lille's academy, making his competitive debut in January 2013.