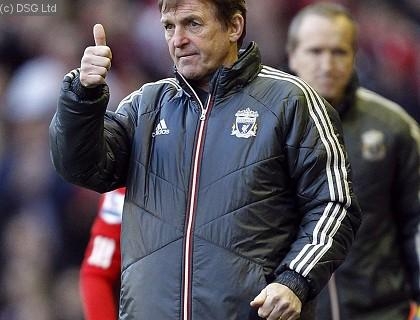 The Cottagers' previous 30 visits had failed to produce a victory and Merseyside, in general, has been an unhappy hunting ground.

Saturday's woeful 4-0 defeat to Everton at Goodison Park extended Fulham's run in league matches to no wins in 48 trips to the city of Liverpool.

But all that changed courtesy of Martin Skrtel's fifth-minute own goal and a severely-weakened Reds line-up as manager Kenny Dalglish made nine changes to protect his major stars in the pursuit of a second domestic trophy of the season on Saturday.

But the absent players only enhanced their reputations as their team suffered back-to-back home defeats - having lost to West Brom last time out - and a fourth loss at home.

They have now dropped an astonishing 30 points at Anfield in the current campaign, having won just five times in 18 matches.

Prior to the game Dalglish had insisted cup final places were up for grabs but on the evidence of this performance only Skrtel and Andy Carroll stand a chance of starting.

Fulham had an absentee of their own, with manager Martin Jol missing his second successive match with a chest infection, but it did not seem to affect them.

Early on the name of Roy Hodgson was chanted by the small number of visiting fans, who have fond memories of the newly-appointed England manager after he took them to a Europa League final two years ago.

It was difficult to assess whether it was a celebration of his promotion to the national team job or a taunt to Liverpool fans - who never took to the man who succeeded Rafael Benitez and lasted just six months and Anfield.

Liverpool's problem has stemmed from dominating games but not scoring goals but they did not even have the chance to get into their stride before they were behind.

It was a goal created by two former Reds as left-back John Arne Riise crossed to ex-youth team player Alex Kacaniklic, who deflected the ball on to captain-for-the-night Skrtel who diverted it past Doni.

Clint Dempsey and Damien Duff were Fulham's brightest players in the opening exchanges and when the former chipped the ball forward the latter poked in a shot which the Liverpool goalkeeper turned behind.

It took until midway through the first half for the home side to get going with Maxi Rodriguez shooting well over before Dirk Kuyt volleyed wide from Carroll's lay-off.

They would have equalised in the 28th minute had Brede Hangeland not stopped Jonjo Shelvey's shot on the goal-line.

Carroll, returning after a minor groin complaint kept him out of the weekend win at Norwich, looked fresh and did well to make his aerial threat count in the first half, although it was mainly in providing knock-downs for team-mates.

He proved equally adept with his feet in sending Shelvey through the inside-left channel but the midfielder curled a shot wide of the far post.

Carroll had one headed chance of his own just before the interval and although his effort was straight at Mark Schwarzer, the Fulham goalkeeper almost made a mess of it before collecting his fumble.

The second half brought a change with Stewart Downing replacing Jordan Henderson and the England winger was soon into the action firing a long-range shot just wide.

Liverpool's tempo also increased but it was the visitors who created the first real chance after the break.

The woodwork, struck 30 times, has been Liverpool's nemesis this season but it rescued them just past the hour when substitute Kerim Frei's shot hit the post with Doni at full-stretch.

Carroll was continuing to put himself about up front and a great side-step beat Hangeland in the penalty area. But, with the ball on his weaker right foot, Aaron Hughes did enough to deflect his shot behind.

The introduction of 17-year-old reserve-team prodigy Raheem Sterling with 15 minutes to go gave the crowd a lift but they were holding their breath when Frei cut open the defence only for Doni to deny Dempsey with a sharp save low to his left.

But there was no sign of a rousing finish as Liverpool signed off before Wembley with a whimper.