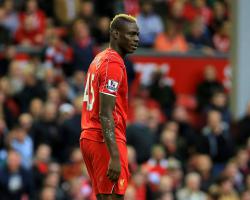 Liverpool 2-1 Swansea: Match Report - view commentary, squad, and statistics of the game as it happened.Reds' late show stuns 10-man SwansDejan Lovren scored a dramatic 95th-minute winner as Liverpool came from behind late on to beat 10-man Swansea 2-1 at Anfield and advance to the Capital One Cup quarter-finals

The visitors had looked destined to repeat their feat in 2012-13 of winning at this ground at the same stage of the competition - en route to claiming the trophy that season - after Marvin Emnes gave them a 65th-minute lead with a fine strike.But Reds boss Brendan Rodgers on this occasion could celebrate a victory over his former club thanks to an 86th-minute finish from substitute Mario Balotelli and then, after Federico Fernandez's stoppage-time sending-off for a challenge on Philippe Coutinho, Lovren's header in the dying seconds - his first Liverpool goal.Liverpool - without a goal in their last two games, both of which had also been at Anfield - controlled possession in the first half, but remained unable to make it count whenever they probed.Captain for the night Jordan Henderson hoisted an early free-kick high over the bar, before Gerhard Tremmel got behind a low Lucas Leiva drive from the edge of the box.The lively Coutinho dragged a shot wide having tried his luck from the edge of the area, and his corner was then headed well off-target by Rickie Lambert.A further Coutinho burst saw the ball move to Henderson and on to Lazar Markovic, who skewed horribly into the stand.Fabio Borini, the forward once at Swansea on loan, got involved as Liverpool looked to step things up, turning nicely away from his marker and curling just wide

Soon after, he seized the ball as the visitors lost possession, drove forward and forced Tremmel into a decent save.Another man playing against his old team, Jonjo Shelvey, then came to the fore as the Swans suddenly applied some pressure with the half nearing its end.The England international took one free-kick which was cleared as far as Nathan Dyer, whose shot deflected wide, and moments later, fired another low towards goal, bringing a diving save out of Brad Jones.It was Swansea then showing the greater urgency at the start of the second half, with Bafetimbi Gomis heading a corner in to Jones.Coutinho had sent another shot at Jones and subsequently miscued at the end of a passing move, shooting over.But it was the away side now looking more likely to break the deadlock, and they duly did 20 minutes after the interval as Shelvey's through-ball was helped on by a touch from Neil Taylor to tee up Emnes, who beat Jones nicely with a shot on the swivel.Emnes soon threatened to score again, seeing his strike deflect into Jones' arms, but Liverpool then caused panic in the Swansea area as Glen Johnson's fierce effort was parried by Tremmel and cleared behind

The resulting corner led to a scramble which the Swans survived

Tremmel dealt with further attempts by Coutinho and Lambert before the latter - whose search for a first Reds goal has now extended to 10 games - was withdrawn for Balotelli.Within seven minutes the maverick striker had broken his own drought, netting his second Liverpool goal and first in nine matches as he got ahead of Angel Rangel to prod in Borini's cross from close range.The late drama did not let up, with Fernandez then seeing red for his sliding tackle on Coutinho - the decision from referee Keith Stroud leaving Swansea boss Garry Monk looking decidedly unamused.There was also a brief off-the-ball confrontation between Shelvey and Balotelli, before Lovren crashed the ball home from Coutinho's free-kick