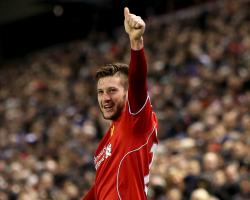 Liverpool 2-2 Leicester: Match Report - view commentary, squad, and statistics of the game as it happened.Foxes fight back to stun LiverpoolLiverpool squandered a somewhat fortuitous lead as a battling Leicester stunned their hosts with two goals in as many second-half minutes to draw 2-2.After back-to-back wins the new year was supposed usher in the beginning of the Reds' drive towards the top four but the same old defensive frailties were exposed by the league's bottom team.Leicester will argue a point was the least they deserved after the home side were gifted the first of two Steven Gerrard penalties when referee Mike Jones ruled the ball had hit Wes Morgan's hand when it was in fact his head.Danny Simpson definitely handballed for the second spot-kick, which saw Liverpool become the first team to score 100 Premier League penalties, but Leicester hit back after the break through substitute David Nugent and Jeffrey Schlupp.Two points dropped against a side which only just ended a run of 13 matches without a win is not the sort of thing required to mount a challenge for the Champions League places and Liverpool - missing Mario Balotelli after an injury in training on Wednesday - ended the day further off the top four than when they started it.Leicester had created the majority of the chances as their hosts struggled to regain the fluidity they displayed in Monday's victory over Swansea.Riyad Mahrez had three of his own in the first half-hour, two free-kicks from identical positions - one of which hit the post with goalkeeper Simon Mignolet beaten after just 66 seconds - and another from Schlupp's low left-wing cross.The Foxes knew from their encounter at home a month ago, when they took the lead but ended up losing 3-1, they could not afford to squander opportunities.One player who was excelling among the Reds mediocrity was Philippe Coutinho, who had a hand in both penalties.Having struggled for form the Brazil international has flourished in an inside-forward role alongside Adam Lallana and behind central striker Raheem Sterling in recent weeks.One early diagonal ball over the top to Jordan Henderson was played to perfection and ruined only by the midfielder starting his run too early and being flagged offside.It was Coutinho's pass to Sterling which produced the first, controversial, penalty as when the England international tried to cut the ball back it hit Morgan.Jones ruled it was hand but television replays showed it was face

Gerrard did not waste too much time worrying about it as he tucked away the spot-kick.Lifted from their slumber Liverpool raised their game in the final third of the pitch with Lallana directing a header wide and firing past the far post after shifting Alberto Moreno's cross from right foot to left on the edge of the area.The second penalty was all Coutinho's doing as his weaving run saw the ball bounce up and hit Simpson's hand.There were no arguments this time and Gerrard went the other side to goalkeeper Ben Hamer's right.An indicator of confidence came when Henderson almost scored a goal of the season contender with a brilliant volley direct from Gerrard's corner.Leicester, understandably aggrieved with the officials' performance, upped the tempo after the break and only a perfectly-timed tackle from the ever-improving Mamadou Sakho prevented Jamie Vardy taking advantage of Kolo Toure's slip.But after Dean Hammond had missed a free-header from Matty James' flick-on at a corner there was a significant momentum change within less than two minutes.In the 58th minute substitute Nugent volleyed home brilliantly from Vardy's knockdown and with Liverpool still reeling from that Schlupp beat Mignolet from the edge of the area just 100 seconds later.Late in the game Rodgers made a number of formation switches as Lazar Markovic and Fabio Borini - and later Rickie Lambert - were sent on in an attempt to salvage two dropped points.Borini had a couple of attempts, one blocked by Markovic, and then proceeded to get in the way of a thunderbolt from Coutinho before a clumsy challenge on him by Morgan could have resulted in a third penalty but the referee was not in that generous a mood