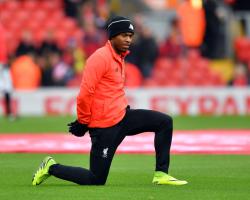 Third-placed Liverpool lost further ground on Premier League leaders Chelsea after another questionable performance from goalkeeper Loris Karius in the 2-2 draw at home to West Ham.

Divock Origi's fourth goal in as many matches salvaged a point after a Dimitri Payet free-kick and Michail Antonio's first non-headed strike of the season had turned things around following Adam Lallana's fifth-minute opener.

But despite four goals all the focus was on the goalkeepers as Karius and West Ham's Darren Randolph both made costly errors.

Karius was criticised for two of the four goals conceded at Bournemouth last weekend - pundit Gary Neville said the German was "miles away" - and he will shoulder a fair share of the blame for both of West Ham's, particularly the first.

When Payet lined up his 25-yard free-kick Karius - whose response to the Sky commentator's comments was "He was a manager for a short bit and now he is back to being an expert again" - generously offered him about 80 per cent of the goal to his right.

The France international duly accepted with the goalkeeper only able to get half a hand on the shot even though it was not right in the corner.

Karius was not as culpable for the second as that dubious honour went to Joel Matip who got himself in a terrible tangle trying to deal with an optimistic looping ball forward, although a deflection did contribute to the centre-back's unfortunate moment.

It allowed Antonio to skip through and roll a shot past the German goalkeeper whose hesitation for a fraction of a second gave the Hammers' forward just enough time to compose himself for his seventh of the season.

It was the first time Liverpool had conceded more than once at home since April and was the 20th time their defence had been breached this campaign, a record only surpassed by Watford of the Premier League's top-half teams.

Everything had been going to plan after Lallana's return to starting line-up after a groin injury produced a goal after just five minutes.

Sadio Mane's cross missed Origi at the near post but picked out Lallana who controlled the ball with his right foot and swept it home with his left.

The England international, Liverpool's most improved and consistent player this season, has now scored as many league goals in 13 matches as he scored in 30 last season.

Lallana should have had a penalty in added time when Payet appeared to push him over but referee Mark Clattenburg awarded a corner from which Matip headed against the crossbar.

However, three minutes after the break there was another clip for Neville to get his teeth into as Randolph let Mane's cross slip through his fingers and Origi bundled it in off the post from four yards.

Randolph redeemed himself somewhat with a brilliant save to keep out Jordan Henderson's long-range strike which was destined for the top corner but it was the closest Liverpool came as they fell six points behind Antonio Conte's leaders.

West Ham's fifth point out of a possible 24 away from home at least lifted them out of the bottom three.