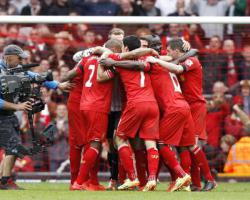 Gerrard joy as Reds edge a thrillerLiverpool captain Steven Gerrard cried tears of joy as his team moved a step closer to a first league title in 24 years with a thrilling 3-2 win over championship rivals Manchester City at Anfield.Philippe Coutinho's strike 12 minutes from time settled a pulsating encounter, which went all the hosts' way in the first half with goals from Raheem Sterling and Martin Skrtel

However, City showed their resolve to bring it back to 2-2 in the second half as David Silva and a Glen Johnson own goal pulled them level, but a sliced clearance from City captain Vincent Kompany fell kindly to Coutinho to rifle in the decisive fifth goal of the match.At the final whistle Reds captain Gerrard looked to the heavens and burst into tears before gathering his team-mates around him into a huddle, no doubt to remind them that this title is not yet won despite this potentially pivotal result

Manager Brendan Rodgers insisted the result of this game would not decide the destiny of the Barclays Premier League title but the Reds have four matches to go and after a 10th successive victory are on a seemingly unstoppable roll.Chelsea, the other title-chasers, visit in a fortnight and a successful negotiation of that fixture would put Liverpool in the driving seat to win a first title since 1990.City still have two matches in hand but this defeat takes things out of their control as they are now seven points off the top.With the 25th anniversary of the Hillsborough disaster falling on Tuesday, floral tributes were presented to Kenny Dalglish and Ian Rush by City's Mike Summerbee, Joe Corrigan and Tony Book before the kick-off and there was a '96 25 Years' Kop mosaic for the impeccably observed minute's silence.But the volume inside Anfield was soon cranked up to 11 and a clearly fired-up Luis Suarez was booked early for a late challenge on Martin Demichelis.The Uruguayan's next intervention was out of the top drawer as his brilliant through-ball put Sterling up against Kompany, the City captain seemingly recovered from his injury scare in training on Saturday.Sterling showed remarkable composure and feinted right, moved left before switching back almost in the same movement and with such speed it left his marker and England goalkeeper Joe Hart so out of position that it created a big gap at the near post in which to drive the ball.It was the first time City had conceded a Premier League goal inside the first 15 minutes and, after Sterling's teasing ball had been guided wide of the far post by Daniel Sturridge, there were more good omens for the hosts when City's star midfielder Yaya Toure was forced off with an injury apparently sustained ballooning a shot into the Anfield Road end.If City were all over the place before he departed they were almost clueless afterwards, allowing Gerrard a free header from a Coutinho corner which Hart superbly tipped over.It only delayed the inevitable as from the resulting Gerrard corner Skrtel easily lost Kompany, nipped in front of Gael Clichy and flicked a header over Hart and inside the far post.The speed of Liverpool's attacks had City chasing shadows - unfamiliar territory for them - and Coutinho, Suarez and Sturridge combined to almost make it three.When City did pierce Liverpool's defence Gerrard, excellent in nullifying the first-half threat of Silva, produced the perfect tackle to deny Edin Dzeko inside the area.However, Mamadou Sakho, who kept his place at the expense of a fit-again Daniel Agger, managed to get away with a less precise challenge on the Bosnian as they raced to the byline.Silva's woeful free-kick driven straight into the wall appeared to suggest Gerrard had succeeded in smothering all the creativity out of the Spain international but, after Sterling and Johnson both cleared from under their own crossbar and Simon Mignolet saved Fernandinho's volley, it was a different story in the second half.James Milner's introduction for Jesus Navas five minutes after half-time produced a positive response with the England international combining to allow Silva to expertly round off an incisive passing move from close range.Silva, finding greater freedom, created the equaliser when he drifted left and drilled in a low cross which Johnson diverted past Mignolet.City were now in the ascendancy and Silva should have put them in front when substitute Sergio Aguero, making his first appearance for a month after a hamstring problem, skipped past Skrtel and crossed to him but the Spaniard guided his shot wide.It was to prove costly as a misjudgement by Kompany presented Coutinho with a first-time chance which he drilled past Hart with 12 minutes to go.Liverpool were hanging on going into five minutes of added time and fatigue played its part as Jordan Henderson lunged in on Samir Nasri and was shown a straight red card by referee Mark Clattenburg.They held on and the team huddle at the end, with Gerrard offering his words of wisdom accompanied by chants of 'We're gonna win the league', certainly put a smile on the face of watching owner John W Henry.City now need favours from other teams to if they are to reclaim the title but the day finished in Liverpool's favour - just