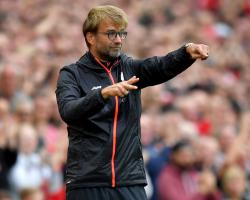 Liverpool stormed to the top of the Premier League table for the first time since May 2014 courtesy of a 6-1 Anfield annihilation of Watford.

The Reds were last at the summit in the latter stages of the title race three seasons ago, when an irrepressible attack looked set to deliver a long-awaited league championship on Merseyside only for defensive fragilities to rob them of silverware.

Jurgen Klopp's current team have all the forward flair of that Brendan Rodgers team, with Sadio Mane, Philippe Coutinho and Emre Can all scoring in the space of 16 first-half minutes here, and Roberto Firmino, Mane and Georginio Wijnaldum adding further goals after the interval

And though Daryl Janmaat's consolation robbed them of a second clean sheet, this was an emphatic answer to those querying Liverpool's title credentials.

News of Arsenal's lunchtime draw with Tottenham brought cheers from the Anfield faithful prior to kick-off as they knew a home victory would now guarantee top spot.

Some early misplaced passes may have owed to nerves given what was at stake but the hosts soon hit their stride.

They should have been ahead as early as the 16th minute when Coutinho's deep corner made its way through to Lucas, with the converted centre-back firing at Heurelho Gomes when one-on-one.

The Hornets had another let off moments later when Coutinho stepped inside Janmaat and fired into the side netting in what would serve as a warning that the Dutchman would not heed later in the half.

The deadlock was broken in the 27th minute as another Reds corner provided a chance, Coutinho this time going short before flighting in a cross which Mane reached ahead of Janmaat to steer a flicked header beyond Gomes.

Klopp's side went from right to left and when Firmino fed Coutinho, the Brazilian side-stepped Janmaat and drilled an attempt between Younes Kaboul's legs and past Gomes.

The Hornets keeper injured himself in trying to make the save so Costel Pantilimon came on to try and stop the rout that was unfolding.

Even at six foot, eight inches the goalkeeper could only watch as Adam Lallana's 43rd-minute cross was nodded in by Can, one of four Liverpool players in the box awaiting the delivery.

The second half followed a similar pattern as Liverpool increased their lead and the fourth goal again stemmed from a set piece.

Coutinho's free-kick came to Jordan Henderson out on the left and he played in Lallana to cross for Firmino, who was left with the simple task of applying the finish in front of goal.

He chased down Henderson's pass into the box and beat Jose Holebas to the ball, then held it up long enough to spot Mane's run, with the Senegalese the grateful recipient of an assist threaded between two defenders.

Mane and Lallana made way with the job done, though a clean sheet eluded Loris Karius as Janmaat provided silver lining to the Hornets' rotten afternoon.

Karius had twice thwarted Etienne Capoue, the second a terrific one-on-one save, but he was beaten by Janmaat's left-footed drive into the corner after Nordin Amrabat had rolled past James Milner.

The home side's five-goal advantage was restored, though, as Wijnaldum scored in stoppage time after fellow substitute Daniel Sturridge, who was twice denied by the crossbar had an effort saved.

It was the first time Liverpool had scored six in the league at Anfield since 2009 and, on this evidence, they are ready to attempt to end an even longer wait for a title.