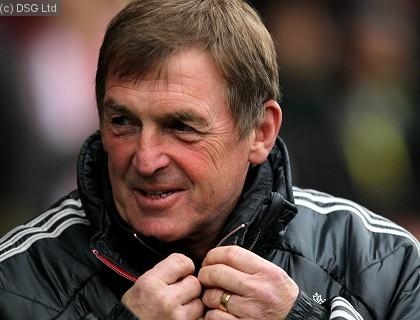 Kenny Dalglish's side were as energetic and irresistible in the first half as they had been lethargic and wasteful for an hour at Wembley.

Chelsea manager Roberto Di Matteo had virtually accepted his side could not qualify for the Champions League with a top-four place by naming an understrength team with eight changes from Saturday, with his sights now set on a Champions League final.

But even if he had put out the side who did so well for 60 minutes on Saturday it is debatable whether they would have been able to resist as the Reds scored four in the league for the first time since the 5-2 win at Fulham a year and a day ago.

The hosts raced into a 3-0 first-half lead through a Michael Essien own goal, Jordan Henderson and Daniel Agger while Stewart Downing also missed a penalty.

Ramires pulled one back just after the break but Jonjo Shelvey restored the three-goal cushion.

Liverpool's shirt sponsors Standard Chartered swapped their logo for Seeing is Believing, one of the bank's initiatives for fighting avoidable blindness, but fans must have been questioning what they witnessed with their own eyes in the first half.

The accusation levelled at Dalglish's side on Saturday was that they did not turn up until it was too late.

That was far from the case in front of their own fans as they were 3-0 up inside half-an-hour and should have been even further ahead by the interval.

Luis Suarez's nutmeg on John Terry served as an early warning, the Uruguay international dragging a shot wide, while Andy Carroll's decision to opt for placement rather than power saw his shot drop over the crossbar.

The woodwork has been Liverpool's downfall this season but they enjoyed a let-off themselves in the 17th minute when Branislav Ivanovic planted a free header against the post at a corner.

But in an eight-minute spell the hosts virtually put the game out of sight with three goals almost from nowhere.

First Suarez produced a brilliant run from wide on the right to get to the byline and his cut-back was turned in by Essien.

A slip from Terry put Henderson through on goal to curl a low shot past Ross Turnbull and then, in the 28th minute, Carroll headed down a corner for Agger to nod in from close range.

But a familiar foe returned again as Downing's 30-yard dipping volley struck the crossbar before the England winger drilled a penalty at the post late in the half after Ivanovic had been punished for knocking over Carroll.

Spot-kicks have also been an issue for the Reds with that the fifth out of six in the league which has gone begging this season, with others also missed in their runs to two cup finals.

But the hosts did not back down and, if anything upped the pressure, which led to their fourth.

An out-of-position Turnbull mis-kicked straight into the path of Shelvey 30 yards out and he drilled a shot into an empty net.

Dalglish was criticised for leaving Carroll out of the starting line-up for the cup final despite the 23-year-old noticeably improving over the last six weeks in particular.

The club's record signing has had to work hard to not only impress his manager but fans and he must have had a smile on his face after receiving a standing ovation simply for chasing the ball deep into the corner to ensure Chelsea received only a throw in.

It is not what #35million strikers are paid to do but it was greatly appreciated by the majority of the 40,721 at Anfield.

So was the save by Jose Reina, who by his own admission has had a poor season and was at fault for Chelsea's opening goal at Wembley, when he brilliantly denied substitute Romelu Lukaku's header from close range.

Liverpool's onslaught continued late on with Henderson, Suarez and Agger all putting efforts wide but the job had been done in the first half.

Di Matteo will now focus on the Champions League final. Dalglish, still to lose a league match against Chelsea in 12 meetings as manager, will already be looking at summer strengthening to catch up with their Blue rivals.