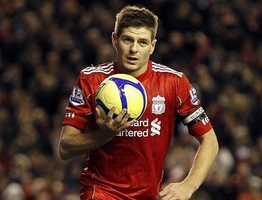 Liverpool manager Kenny Dalglish failed to come up with the winning formula at Anfield as his side were held to a goalless draw against Stoke.

An unfamiliar line-up to combat the visitors' obvious physical strengths initially appeared to cause more problems for the Reds than it did their opponents.

It took until after the break for Dalglish's side to find their feet but they still struggled to carve out chances against the obdurate Potters and it cost them yet another three points.

They may still be unbeaten at home this season but they have now drawn seven of their 11 matches and the issue is starting to become more of a problem.

The point was exactly what Stoke had come for, however, and they left happy after doing a textbook job in stifling their hosts' creative abilities.

Liverpool lined up in the same 3-4-2-1 formation with which they beat Stoke at home last season but with the personnel different - including summer signing Sebastian Coates being given his first Barclays Premier League start - they struggled to adjust.

Dirk Kuyt, without a league goal since the final day of last season, lacked support up front and while Glen Johnson, on the right of midfield, roamed everywhere on the opposite flank Jose Enrique got forward less than he did playing at left-back.

There appeared to be misunderstanding and confusion everywhere Liverpool turned and Stoke were more than grateful to watch it all unfold in front of them with little intervention required on their part.

Very little quality was evident in the first half - Steven Gerrard's raking 60-yard crossfield ball straight to the feet of Enrique apart - as players ran down the blind alleys Stoke shepherded them into.

In fact the visitors had probably the best chance midway through the first half from a quick counter-attack but even then Matt Etherington's shot from outside the penalty area was easily saved by Jose Reina.

Stewart Downing, Gerrard and Jordan Henderson all had shots from distance but only the latter's troubled goalkeeper Thomas Sorensen.

For all their struggles at home this season, with four wins and six draws in 10 matches before kick-off, it was easily the worst 45 minutes seen at Anfield since Dalglish returned as manager a year ago.

There was a slight improvement after the break but not to the standard expected of a side with top-four ambitions.

Johnson twice cut in from the right to shoot with his left foot, having his first blocked and dragging the second wide, and when Enrique finally got forward his cross from the left byline was too close to Sorensen.

Striker Andy Carroll made his entrance in the 59th minute to replace Downing and immediately caused a problem with Robert Huth putting him a headlock, unseen by referee Howard Webb, from Gerrard's corner.

The England international's next intervention was less helpful, however, blocking Henderson's goalbound volley from Enrique's cross before then deciding he required a change of footwear.

Gerrard's threaded through ball picked out the toiling Kuyt in the area but the Holland international's first touch let him down.

The Dutchman was to miss Liverpool's best two chances in the final 13 minutes when he headed Enrique's deflected cross wide and then nodded into the side-netting at the far post.

Prior to those chances he had also gone down in the area as he tried to reach Johnson's cross after Carroll had twice appeared to be fouled by Huth in the box.

Martin Skrtel's downward header from Craig Bellamy's corner bounced over and with it went his side's chances of getting a winner as the hosts ran out of ideas.